Call of Duty 4: Modern Warfare is the first Call of Duty installment not set during World War II and instead focuses on the progression of warfare as a contemporary infantry soldier. As such, the first-person shooter (FPS) presents you with a gripping modern-day action-thriller that deploys you into heart-stopping battles across the world’s most treacherous hotspots. It strays from the constant assaults, interspersing high-intensity fire fights with slower-paced drama and suspenseful clandestine action. The plot remains cinematic, with story lines interlaced from the perspectives of members of the British Special Air Service and United States Marine Corps Force Recon. 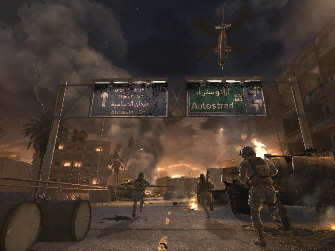 The new action-thriller from the award-winning team at Infinity Ward, the creators of the Call of Duty series, delivers the most intense and cinematic action experience yet. Call of Duty 4: Modern Warfare arms gamers with an arsenal of advanced and powerful modern day firepower and transports them to the most treacherous hotspots around the globe to take on a rogue enemy group threatening the world.

In the single player you play as both a U.S Marine and British S.A.S. soldier fighting through an unfolding story full of twists and turns, players use sophisticated technology, superior firepower and coordinated land and air strikes on a battlefield where speed, accuracy and communication are essential to victory.

As Call of Duty 4: Modern Warfare’s single player campaign unfolds, the player is introduced to new gameplay at every turn… One moment you are fast-roping from your Black Hawk helicopter after storming into the war zone with an armada of choppers, the next you are a sniper, under concealment, in a Ghillie suit miles behind enemy lines, the next you are engaging hostiles from an AC-130 gunship thousands of feet above the battlefield. After you complete the Story mode a score-based Arcade mode is unlocked where you attempt to string together kills to ring up combos.

The epic title also delivers an added depth of multiplayer action providing online fans an all-new community of persistence, accessible, customizable gameplay experience to gamers of all levels. This includes a character class system that allows players to create custom infantry classes with numerous weapons and perks (special equipment or abilities) to assign to their soldier.

The player can call in UAV reconnaissance scans, air strikes, and attack helicopters by achieving a three-, five-, or seven-enemy kill streak, respectively. The five default classes include Assault, Special Ops, Heavy Gunner, Demolitions, and Sniper. Only three of the default classes are available to a first time player; the rest are unlocked as the player gains more experience online and gains higher rank. Create-a-class can be unlocked at level 4; players can name and save up to five custom classes for quick access in multiplayer matches.

Since I shouldn’t spoil the single player by talking about the story, and you get a tutorial as you start the game anyway. So let’s talk about the multiplayer game modes. Here’s what’s included:

* Team Deathmatch – Use teamwork to kill opposing players and reach a predefined score limit or until the time limit runs out.
* Free-for-All – Every player for him/herself regardless of nominal “faction” alliance.
* Domination – Flags are placed in strategic points around the map. All flags start neutral. Teams battle to hold the most flags. Game ends when the time limit is reached, or the score limit is reached.
* Sabotage – Similar to Search and Destroy, a neutral bomb is placed in the center of the map, both teams rush to capture the bomb and plant it on the enemy’s objective. Each team’s goal is to take the bomb and blow up the objective in the enemy’s base. The bomb carrier can fire his weapons, but his position will be announced periodically throughout the game. Also, unlike Search and Destroy, players have unlimited respawns as opposed to just one per round, although it is not instantaneous like Team Deathmatch or Free-for-All.
* Headquarters – A laptop spawns somewhere on the map. The players goal is to capture the laptop for your team. If one team captures the laptop, they must defend it from being re-captured (and therefore destroyed) by the opposing team. The team that has captured the laptop does not respawn, whereas the team that is attempting to re-capture it respawns normally. For every 5 seconds a laptop remains under a team’s control, that team scores 5 points. To capture/destroy a laptop, the player must stand in a defined area near the laptop (usually one must stand in the same room it is in). If multiple players from the same team are within this area, the laptop is captured more quickly. A new laptop spawns after the old one has been re-captured or when the team holding the laptop does so for a preset amount of time, whichever comes first. The first team to capture the laptop has the advantage, for the new HQ always appears closer and easier to access to the dominating team. This can however be neutralized to an extent by spreading out to where the laptop may spawn next, preventing the enemy (who just caught it) from spawning right by it.
* Search and Destroy – There are two teams: attackers and defenders. Attackers try to plant a bomb at one of two bomb sites, and defenders try to defend the bomb sites. If the explosives are planted, the defenders must defuse them. In this game mode, players do not respawn if they die. The attackers win if they destroy either of the two bomb targets or if they eliminate the entire opposing team. The defenders win if time runs out, if they defuse the bomb after it has been planted, or if they eliminate the entire attacking team before the attackers have planted the bomb. This is similar to the defuse gamemode in Counter-Strike.
* Hardcore Team Deathmatch and Hardcore Search and Destroy – These modes are identical to their normal versions, except that the player’s HUD is limited (for example, the crosshair is removed), bullet damage is higher and friendly fire is on.
* Old School Free-for-all – There are no classes. Weapons are pickups, health is under a gauge form and can be increased with medipacks, and jumps are higher. This mode emulates traditional multiplayer FPSes like Quake and Unreal Tournament, and to a degree, previous versions of Call of Duty.
* Oldcore- A fusion between Old school and Team Hardcore Deathmatch. Weapons and perks are pickups, there are no classes, but HUD is limited, friendly fire is on and bullet damage is higher. Team Deathmatch and Free-for-All can be played in this mode.
* Ground War – Big team games -Team Deathmatch and Domination. (console only)
* Mercenary Team Deathmatch – Team Deathmatch with random teams, no parties allowed. Use teamwork to kill enemy players and reach the score limit. (console only)
* Team Tactical – Small team based games (3v3), includes Team Deathmatch, Domination, Headquarters, Sabotage, and Search and Destroy. (console only)
* Cage Match – 1v1 deathmatch. (console only)

So what are the main features of Call of Duty 4?

* Coordinated Assault and Support– Delivering the most visceral action thriller ever, the title covers modern battle from the soldier to the satellite, where the need for air support is critical to success. The adrenaline rush deployment enlists gamers to fast-rope from tactical helicopters, ride in an armada of attack choppers, utilize jets to remove enemy strongholds and even engage hostiles from thousands of feet above the ground inside a state of the art aerial gunship.

* Cinematic Quality Graphics and Sound – Featuring stunning next-generation graphics, players will be drawn into the cinematic intensity of Call of Duty 4: Modern Warfare. Amazing special effects, including realistic depth of field, rim-lighting, character self-shadowing, texture streaming as well as physics-enabled effects will enlist players into the most photo-realistic gaming experience. Combine the lifelike graphics and the realistic battle chatter with the Call of Duty award-winning sound design and players will face battle as they have never before.

* Unparalleled Depth to Multiplayer – Multiplayer builds from the success of Call of Duty 2 delivering a persistent online experience for greater community interaction. Featuring create-a-class options allowing players to customize gear that is best suited for play, to experience points enabling unlockables and perks, all the way to matchmaking and leaderboards for the latest in tracking, Call of Duty 4: Modern Warfare’s multiplayer is set to deliver easily accessible and addictive online play for all.

FUN FACTOR – 9.5
Featuring a tense storyline, filled with plot twists, Call of Duty 4 thrusts you into battle like never before. Are you a fan of first-person shooters? If yes, buy Call of Duty 4 right away! While the single player campaign is brief, it’s an intense experience no FPS fan should miss out on. And the online multiplayer has a fantastic ranking system with custom classes and perks adding to a deep and fulfilling experience, it’ll keep you busy for a long time. With a fun factor through the roof this gameplay masterpiece comes highly recommended.

Graphics – 10
The graphics look absolutely fantastic with amazing special effects, including rim-lighting, depth of field, texture streaming and character self-shadowing. You’re enlisted into one of the most photo-realistic high-definition graphic gaming experiences imaginable. And that’s not said lightly, the game’s proprietary engine even calculates “Bullet Penetration” based on surface type and entity thickness, making wooden fences and thin walls not a good place to look for cover. Best of all is that it’s running at a consistent 60 frames per second throughout the game.

Audio – 9.5
Famed composer Harry Gregson-Williams, whose credits include Enemy of the State, The Chronicles of Narnia, Team America, Man on Fire and Spy Game, directed a soundtrack featuring an original score by Stephen Barton that draws gamers harder and deeper into the epic experience. Performed by the legendary Abbey Road Studios (in London, England) full orchestra it only sounds better in piercing 5.1 surround sound. The sound effects are fantastic too, weapons sound real and are satisfying, add in the environmental sound effects and convincing voice acting and you have yourself a completely immersing ambiance.

Ingenuity – 9.5
All your Call of Duty controls are back. It’s a fantastic shooter experience, so much so that you’ll fly through the intense campaign mode with little to no complaints, it does hit home the slogan of “Go deep, go hard, or go home.” It’s very compelling to watch and play. The multiplayer is also a thrill, so much so that shooter fans will no doubt get hooked on the various well-balanced modes and new experience leveling. You’ll literally feel tired after playing for hours, which just goes to show how intense the gameplay is.

Replay Value – 9.0
Expect the single player campaign in Call of Duty 4 to take 5 to 10 hours to play through, depending on the difficulty level you select and your skills. The community-oriented Call of Duty 4 multiplayer gameplay features a robust leveling system, a variety of unlockable perks, hot-join and matchmaking, as well as create-a-class and party capabilities to ensure that players of all skill levels can join in on the fun for up to 18-players on Xbox 360 or PlayStation 3 and 32-players on Windows PC. Additionally over 100 challenges and a host of new game environments and modes deliver lots possibilities. Infinity Ward has also included Kill-Cam, a fan favorite feature that they created in Call of Duty 2 which allows for spectator instant replays. It’s definitely deep, fun and addictive enough to keep you and (so far) seven million other buyers entertained until the upcoming release of Call of Duty 5.