Zack & Wiki: Quest for Barbaros’ Treasure (originally known as Treasure Island Z) may look cutesy, but don’t be deceived by its looks, this is no kids game. The Wii-exclusive adventure Zack & Wiki takes you on will be filled with brainteasers and uses the full extent of the Wii Remote controller.

Play alone or as a group to work through each increasingly perplexing puzzle. Use the Wii Remote to navigate, open objects, transform items and unlock new pathways. Even action-heavy battles with bosses are puzzle-based, so you’ll need to think fast on your feet. Read on to find out how this mind-provoking puzzle adventure goes beyond the ordinary into the extraordinary! 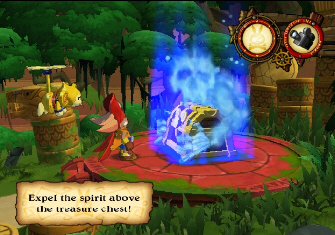 As a little pirate with big dreams, Zack doesn’t just have his sights set on mere treasure chests or spectacularly speedy pirate ships. Instead, Zack has his sights on becoming the greatest pirate who ever lived! To reach that lofty goal, he is going to have to outwit, outsmart and out-duel every obstacle that gets in his way. It’s a good thing that he has found his new enchanted pal, Wiki, a magical hand bell with the power to transform ordinary objects into practical items.

Get ready to explore seven vibrant and fantastic lands, from lush jungles and frigid ice temples to colossal castles and floating airships. Each level contains multiple sub-levels full of peril, puzzles and plunder.

Legend has it that a revered pirate named Barbaros once stole the world’s biggest treasure and hid it on a mysterious island. Though no one knows of its exact location, stories about the untold riches that lay in wait have been passed down through the ages, driving pirates from all walks of life to pursue the alluring prizes. One of these treasure seekers, a young apprentice pirate named Zack happens upon a mysterious talking skull, the skull of Barbaros himself. Barbaros promises to reveal the key to the island, if Zack will help to lift the curse he is under.

Watch the start of Zack & Wiki.

Zack & Wiki: Quest for Barbaros’ Treasure is an innovative, full-length, third-person perspective puzzle adventure game that uses the unique control mechanics of the Wii Remote and challenges gamers to “play different.” Players will explore a variety of wondrous environments and stages, solving puzzles and interacting with the world in search of a legendary pirate ship and the ultimate pursuit of becoming the greatest pirate the world has ever seen.

Inventive gameplay mechanics and controller movements allow players to move and open objects, transform items, unlock new pathways and navigate through perilous stages based on a variety of themes including a jungle, ice temple, volcanic caves and more, each with multiple sub-areas. Players will use the Wii Remote controller in various ways: rotate handles, turn keys to open doors, hold the Wii Remote in front of you to play a piccolo and much more in order to solve the progressively difficult puzzle stages and collect key items that will lead to the legendary pirate ship.

The player can point to objects on the screen, identified by a cursor, to have Zack investigate the item or move about the level. Enemies in the level can be transformed into usable items by having Zack shake his companion Wiki like a bell. When the player has Zack interact with a usable item, the game shifts to a first-person view, and the player must mimic the operation of the item with the Wii Remote. For example, to cut down a tree with a saw, the player holds the Wii Remote horizontally and moves it back and forth. Successful actions are awarded points based on the cleverness of the action, how many attempts it takes to perform the action correctly, and the difficulty level.

So what are main features of Zack & Wiki?

* Make full use of the unique Wii Remote controller to explore and interact with the environment.
* Seven themed stages each including multiple sub-areas.
* Jungle ruins, ice temple, airship, ancient castle and other environments.
* More than 20 sub-areas to explore.
* Variety of distinct bosses.
* More than 35 enemies to encounter and outwit.
* More than 80 objects to manipulate and combine.
* More than 500 items to search for and collect.

Watch how much fun playing Zack & Wiki is.

In conclusion let’s rate how much fun Zack & Wiki: Quest for Barbaros’ Treasure is on a scale from 1 to 10?

FUN FACTOR – 9.0
Zack & Wiki is an old school classic adventure with a new twist, by using classic point-and-click mechanics and joining them with excellent Wii Remote controller motion sensitive actions. At the start of the game all the main characters will be introduced and you’ll be shown the ropes on how to use the controller, but after that you’ll find yourself thrown into the action and caught up in an absolutely fantastic high-quality adventure game that you will feel you have to finish. It’s THAT likable and solving environment-related puzzles will make your brain crunch and when… “Eureka!”… solved feel extremely rewarding. The endresult is pure puzzle goodness. At a budget price of $40, you shouldn’t miss out on this treasure of a game. 😉

Graphics – 9.0
Gorgeous cel-shaded graphics that will baffle you with their sharp artwork and bright colors. The art design will probably remind action-adventure fans of The Legend of Zelda: Wind Waker. The character designs might not be the most memorable in Zack & Wiki, but as far as anime characters go they fit the cutesy story. The very challenging but never impossible puzzle designs and excellent boss fights make your adventure a great challenge. Keep your eyes open for special effects like ripples in the air that heat generates. All the animations are seamless too.

Audio – 7.0
The background music will be average most the time, but once in a while a fantastic sounding tune will come alone (like the main theme) that’s uplifting and complements the stage’s gameplay. Not much voice acting from Zack and the other characters other than short and sometimes funny Japanese sentences… and all Wiki does is exclaim with high-pitched sounds, which explains the lack of character building for the pair of main characters.

Ingenuity – 9.5
Zack & Wiki works like the old school point-and-click adventures on PC, except that your mouse and keyboard combo is replaced by merely the Wii Remote. The A-button moves Zack to your cursor, while the B-button controls your camera viewpoint around Zack’s third-person perspective. The rest of the game relies solely on the motion sensor in your Wii Remote controller that you move around in order to explore the island and interact with (and even examine) everything that crosses your path. There are so many different fun gestures to execute, it’s really only possible on the Wii. It’s extremely intuitive and will become second nature in mere moments.

Replay Value – 8.0
Expect the game’s trip through the island to last you at least 15 to 25 hours. If you want to complete it fully by going through some of the stages that have multiple ways to finish them, and to improve your scores in all stages, then the adventure can take you up to 40 hours! Even if the puzzles get much tougher in the later stages (also noticeable by you dying a lot and retrying), to help there’s an “Oracle Dolls” hint system in place where you can buy hints to progress. This practice will not only cost you money and increase the costs of the next hint each time you buy a new hint, but you’ll also lower your score. This gives you incentive to either try and solve the puzzle on your own or you might end up having to replay a level to get enough money to pay for the next hint. It’s quite the fun challenge. Oh and while Zack & Wiki is a single player experience (where others can help out as you play) a maximum of three more controllers can be turned on for others to doodle on the screen with, which creates some fun effects, and is meant to point out clues on-screen.

All in all, there’s so much re-playability thanks to the fun the game delivers. So let’s hope this is the return of the point-and-click adventure genre and it will sell well enough for Capcom to make Zack & Wiki 2 for Wii!