An Uncharted review of Drake’s Fortune on PS3

Building on its legacy of extraordinary storytelling, developer Naughty Dog (of Crash Bandicoot and Jak and Daxter fame) has created an elaborate plot that will have players guessing at every twist and turn. Uncharted: Drake’s Fortune brings players into a world ripe with realism and unexpected juxtapositions. Fancy words aside, it’s a trip you don’t want to miss. 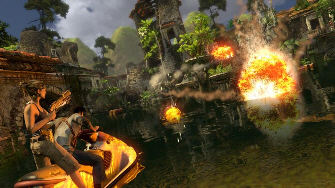 The Drake’s Fortune subtitle of Uncharted is a reference to the famous explorer Sir Francis Drake and his fictional hidden treasure. In the game, players assume the role of Nathan Drake, a treasure hunter who alleges to be the descendant of the famed privateer.

The game’s story tells of a 400-year-old clue in the coffin of Sir Francis Drake sets a modern-day fortune hunter on an exploration for the fabled treasure of El Dorado, leading to the discovery of a forgotten island in the middle of the Pacific Ocean.

The search turns deadly when Nathan Drake becomes stranded on the island and hunted by mercenaries. Outnumbered and outgunned, Drake and his companions (Sully and Elena) must fight to survive as they begin to unravel the terrible secrets hidden on the Island.

Uncharted: Drake’s Fortune has gameplay that’s best described as mix of 3D platforming and a third-person run and gun gameplay elements. Like the platforming elements from games like Prince of Persia: The Sands of Time or Tomb Raider: Legend, you control Nathan Drake as he jumps, swims, grabs and moves along ledges, climbs and swings from ropes, and other similar acrobatic actions to make his way along the ruins on the various islands that he explores. When facing enemies, the player can use melee and three-hit combo attacks at close range to take out foes, or can opt to use weapons. Nathan can only carry one pistol with/without one rifle at a time as well as a limited amount of ammo per gun and grenades. But you can swap the two weapons you carry with other weapons like a Moss-12 Shotgun for a AK-47, or a 9mm pistol for a fully-automatic pistol. The third-person shooter elements are similar to kill.switch and Gears of War, where you can control Nathan to take cover behind walls, and use either blind-fire or covered fire to take out foes, and like the latter game there’s no health bar and the cover system (and later on in the game the evasive rolling move) is essential to surviving and defeating your enemies.

Nathan’s comrades Sully and Elena are even non-playable characters that assist you from time to time. This is a great help thanks to their smart A.I. For example, there are sections where Sully opens doors and lights a fire for Nathan underground that helps you get started on solving a puzzle, or in a simple gunfight where Elena provides not just cover fire for Nathan, but even shoots to kill. Then in other getaway situations Nathan must protect the jeep he and Elena are in using a mounted turret, and where Nathan and Elena use a jetski along water-filled routes while avoiding enemy fire and explosive barrels using weapons such as the M79 grenade launcher and the Makarov PM that Elena fires as you dodge enemy attacks.

The game’s split up into 22 different chapters, throughout these levels are 60 treasures that will glint briefly at times to indicate their presence; these treasures have no direct effect on gameplay, but collecting a number of these will earn Reward Points. Reward Points can be earned also by completing certain accomplishments, such as achieving a number of kills using a specific weapon, making a number of headshots (with accompanying cheers from Nathan), or using specific methods of killing enemies. In subsequent playthroughs of the game, the player can spend these rewards points to unlock bonus content. These special options include unlimited ammo and one hit kills or you can unlock Eddy’s golden gun.

Watch part of the beginning of Uncharted: Drake’s Fortune:

* Using maps and ancient artifacts, uncover clues and unravel mysteries to find a forgotten island and a treasure that was thought to have never existed.

* Drake’s companions and allies play an important role in the adventure through cooperative mechanics, gunplay and exploration.

* Experience fast-paced gunplay: use a variety of environmental elements for cover, shoot enemies off of moving vehicles in high speed chases and more.

* Use an array of hand-to-hand fighting moves to put your enemy off balance. Anything from wild haymaker punches to running drop-kicks.

* Developer Naughty Dog’s advanced animation techniques allow Nathan to switch seamlessly between movements and achieve a whole new level of believability in gameplay. Nathan can reload his weapon while dodging bullets and find cover behind a wall, all in one smooth natural motion.

In conclusion let’s see how much fun Uncharted: Drake’s Fortune is on a scale from 1 to 10?

FUN FACTOR – 9.5
Uncharted: Drake’s Fortune can easily be compared to games like Tomb Raider and Gears of War or movies like Indiana Jones and Romancing the Stone. It would be easy to note all the resemblances and the game is every bit as great as those masterpieces, but really, Uncharted combines all the best gameplay, interactive cutscenes, cinematics, storytelling, thrills, comedy, graphics, music and so many more aspects that make great action/adventures/shooters into what they are… and then proceeds to make them his own all-in-one experience that works very well. “What a fantastic game!” is what I kept thinking as I was playing. The like-able characters really interact great with each other and draw you into their stories. The single player adventure offers one way to proceed, and you’ll never get stuck on a puzzle for more than a few minutes, but that only helps to reinforce the speed at which you’re progressing through the fantastically told story. I mention speed because Uncharted is a rollercoaster ride like no other, much like a summertime popcorn movie you’ll go places you’d always imagined going and see amazing landscapes so beautiful they look to be plucked straight from a holiday guide. The movie likeness is not surprising with a heavily-scripted camera that highlights key moments of gameplay.

If you love action-filled adventures with plenty of platforming and puzzles to keep you entertained for a day or two, Uncharted is a must-have. Every PlayStation 3 owner only has to play this to realize this is the kind of visual and audio thrill ride they wanted to be taken on when buying the console!

Graphics – 9.5
With a maximum HD resolution of 720p the game’s lush environments look absolutely fantastic. Some of the most beautiful jungle features and water effects ever created, make the game look lush and alive. As the characters run and gun around you’ll start to see how smooth everything moves, a huge focus has been put on character animation, also on your supporting characters, but mainly Drake’s run, jump, roll and other movements (like fighting and reactions to danger) animate incredibly smooth as he interacts with the environment. It gives a very cinematic presentation to the action.

Uncharted can easily be called one, if not the, best-looking console game out this generation. What’s setting it apart from the crowd is the huge attention to detail. You’ll see a gust of wind carry leaves through the valley you walk in, plants sway as Nathan brushes past them, every imaginable shadow is present and displayed in a realistic manner depending on light-fall, reflections on the water dip and sway with the ripples, and something really cool I found was when Nathan gets out of the water his entire body including shirt and pants will look dripping wet and slowly dries.

Audio – 9.5
The game’s music features both mellow instrumental tunes, as well as epic adrenaline-fueling orchestral soundtracks that fill up the room. Especially in surround sound the music sounds fantastic, and because it’s context sensitive you’ll get drawn right into the game. The environmental sounds in the jungle are incredibly realistic with wildlife seemingly surrounding you all the time. If you think the graphics look detailed, wait till you hear the sound effects that come your way. At one point I was shooting with my powerful-sounding shotgun and was suddenly fired upon with a rocket launcher. While I dove away the rocket still impacted near enough to do some damage and my ears started ringing (it happens after a loud sound goes off near you) but then it happened again and again and I got worried I had the volume on too loud… until I realized it was the game directing the high pitched beeeeeep sound (that then slowly fades away) to me from the direction of impact, through the back boxes of the surround set!

Suffice it to say the music is sweeping and the sound effects are superb. There’s some excellent voice work from the voice actors as well, that really brings a believable human personality to life in each character.

Ingenuity – 9.5
The controls in Uncharted are explained to you in the early beginnings of the game as a sort of tutorial as you play. They are very intuitive and have a short learning curve. This is mainly thanks to the simplicity the game allows you to move around, because of this I never once found myself falling off a ledge or dying on accident unless it was my own fault through the bad timing of a jump, bad vehicle driving, or not taking cover quick enough during a pirate shootout. Even the Sixaxis controller’s motion sensor comes into play a little when you try to keep balance as you walk over a three that bridges a gap. There are plenty (and obvious) tips to guide you through the game and at the same time they help progress the game’s storyline as you seamlessly move from location to location. The game’s simple but highly polished gameplay elements mean gamers of any skill level and pick up the game and have a fun, fast adventure that never gets boring.

Replay Value – 8
Depending on the difficulty you choose and the pace at which you play, expect Uncharted: Drake’s Fortune to give you between 8 to 12 hours of playtime. Collecting all 60 treasures can give incentive to go through the game again and unlock bonus content in the progress. Much like one of your favorite DVD movies, you’ll want to replay Drake’s Blu-Ray once or twice more to revisit the thrill of its story. And that’s about it. Start looking forward to the sequel: Uncharted 2!