Advance Wars has been reinvented in its second Nintendo DS outing called Advance Wars 2: Days of Ruin (aka Advance Wars 2: Dark Conflict). Set amidst a world in chaos and featuring new characters and settings, a gritty look, an engaging storyline, and online Wi-Fi battles and map trading. Try you hand with new commanding officers and units, realistic graphics, and a new environment.

Strategy fans will rejoice over the long-awaited inclusion of Wi-Fi online play, which adds depth and re-playability. Use Nintendo Wi-Fi Connection and battle against a friend halfway across the world, or use the map editor to create, trade and battle on your own custom maps. 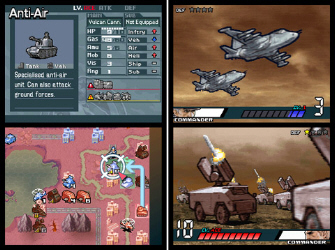 In the world of Advance Wars 2: Days of Ruin a terrible asteroid strike has left the planet devastated and almost 90% of mankind has been killed. Few survivors remain and the world is in chaos. Massive toxic dust clouds block out the sun and are choking out the food supply. New diseases strike without warning. Terror runs rampant as people do whatever is necessary for their own survival. One small band fights to restore human dignity in a world gone mad… but the mission seems impossible. Their own country is being led by madmen. Their former enemy thinks only of revenge. And behind the scenes, a mad scientist with unbelievable power dreams of eliminating the human race once and for all.

Your goal in Advance Wars 2: Days of Ruin is to defeat the enemy army with your own army. Except in certain single player, where the 26 missions have special objectives, there are two ways to defeat an opponent: destroy all of the enemy’s units or capture their headquarters. On top of the 26 main missions, 38 optional training missions are unlocked as these missions are completed. You’ll play through these with four factions: the Rubinelle 12th Battalion (Red), Lazurian Army (Blue), New Rubinelle Army (Yellow), and Intelligent Defense Systems (Black).

The battle system is Turn-Based Strategy. Two to four armies, each headed by a commanding officer (CO), take turns building and commanding units on grid-based maps. Every turn, units, which consist of ground, sea and air units, can move across the different types of terrain and attack enemy units or perform other actions, such as submerging a submarine or resupplying friendly units. The various units can now level up in battle, increasing their capabilities. Units increase their level once for each enemy unit that they destroy. The level of each unit is identified as I, II, or Vet, with Vet being the highest level. While units with higher levels are more powerful than new units, they can still be defeated. Unit experience is not persistent, and the player begins each mission with new units. 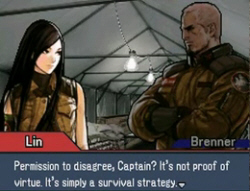 Later in the game the 12 playable CO’s powers come into play that can only be used when the CO is with a unit, and then affect the entire battlefield. For each battle that the CO-equipped unit experiences, the CO’s power meter fills slightly. When the meter is full, the CO can activate his power, which has various effects on allied or enemy units, such as refueling allied units or reducing the range of enemy units. Similar to CO powers, CO effects also influence combat on the battlefield. These effects generally provide minor advantages such as firepower boosts to a CO’s units. As the CO power gauge is filled, the CO’s area of influence, or CO zone, grows larger.

To further add strategy to the game is Fog of War, a phenomenon that prevents players from seeing enemy units other than those in the visual range of their units, various weather conditions which change the terrain effects of the entire map, CO powers, and many other factors can affect the battle. Upon completing a mission, the player is awarded a rank, from C (lowest) to S (highest). The ranks are based on three categories: Power, Technique, and Speed. Power is determined by the highest number of enemy units destroyed in one turn, Technique by how few of the player’s units are destroyed, and Speed by how fast the mission is completed. All three categories are rated on a scale from 0-150, and added together to form a numerical ranking from 0-450 in addition to their letter ranking; for example, any score between 300-450 earns an S ranking.

For the first time in the series, Days of Ruin includes online multiplayer with voice chat over Nintendo’s Wi-Fi Connection service, as well as a feature for players to share their own custom map designs and download maps made by others. Voice chat is unavailable during worldwide online play, and can only be used when playing with a friend. 170 premade maps are included in the game for use in multiplayer, and designed for two, three, and four-player matches. Local multiplayer games can be played with only one DS game card: each player can pass the game to the next player when it is their turn.

So what are the main features in Advance Wars: Days of Ruin?

* More than 60 exciting single player missions. Battle your way through a lengthy campaign through many twists and turns of a highly engrossing storyline.

* Within Story Mode, players can play through an additional 38 Trial stages. Although independent of the Story Mode, the Trial stages add much to the game play challenge and depth. There’s even a free battle mode with 28 maps available from the get-go.

* New strategies also emerge by way of the Command Zone. For the first time, a Commanding Officer can enter one of the units, and by doing this, he or she creates a Command Zone.

* Use the Touch Screen to design your own maps, controlling every aspect from troop placement and troop A.I. behavior to terrain features. Use the stylus to paint and create your perfect map. The multiplayer functionality allows players to share the maps with your friends or upload them to Nintendo Wi-Fi Connection. The DS cartridge stores up to 50 user-created maps.

FUN FACTOR – 8.5
For such a small package, Advance Wars: Days of Ruin sure packs a lot of firepower! A fantastically balanced strategy game. Despite being part of a long series, this game feels fresh, rewarding and fun to play. Outside of the good story and explosive action in the campaign mode, there’s also local and online multiplayer, the latter features voice chat and both include a whopping 170 maps to battle on. Online multiplayer is a very welcome and natural addition, especially thanks to the map editor and map sharing you can do. Whether you’re a fan of the series or someone who doesn’t want an overly complicated strategy game, the nice graphics, cool story and simple interface will make it an easy game to pick up and start playing. For turned-based strategy fans this portable game is a no-brainer to pick up.

Graphics – 7.5
Dark visuals and the comic book style (thanks to the thick lines drawn around everything) give the game a distinct charm of its own. Fans of the series over the years will feel like the game has grown up with them into a more mature gamer’s game, which goes hand in hand with the story that’s aimed at an older audience. The graphics are a good fit.

Audio – 7.5
As it should be, the game’s soundtrack has a techno and metal beat to it. Makes me excited to be playing, it’s very action-oriented. The firepower of your units is well represented through the sound effects.

Ingenuity – 8.5
Unit selections couldn’t be any easier to use nor faster to select thanks to the intuitive stylus touch controls. A perfect match for the turn-based strategy game.

Replay Value – 8.5
The game’s great for short bursts of play, but depending on how familiar you are with the series traditional gameplay, expect the single player missions to take you over 20 hours to finish. You can play multiplayer either locally or online via Wi-Fi, which adds a lot of hours of replay value! Especially since on top of the 170 included maps, you can extensively design up to 50 of your own maps and receive new maps your friends designed as well. If you’re hooked on the game these features could potentially keep you playing for an unlimited amount of time…