Square Enix will be revealing a lot more info about Final Fantasy XIII this year, there’s even a demo planned for this latest game in the RPG series. Outside of saying the demo will give a hands-on with the new battle system, saying “when” it would be released wasn’t part of “revealing a lot more info”. A bit daunting with Final Fantasy XIII’s 2009 release expected in the West. 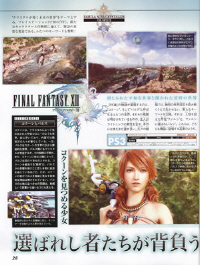 The Japanese Famitsu and Dengeki game magazines revealed new details about the story in Final Fantasy XIII. Cocoon, a floating colony world created by crystals, protects its millions of citizens through technology and mechanization. It contrasts with Pulse, the natural world which lay below it. The residents of Cocoon fear Pulse, which is not mechanized like Cocoon, but has crystals itself, it’s hinted there is an unexpected connection between the two. The story involves a resident of Pulse, an unknown red haired pigtailed young woman.

A CGI scene in the magazine’s screen shots (click the scan above for full size) shows pigtail girl standing on a cliff looking out over a distant landscape of Pulse. Below her, large, tusked dinosaur-like creatures herd through a river valley. Above her in the distance, looking somewhat like a moon, Cocoon floats in the cloudy daylight sky.

There will be two types of creatures in the FFXIII world: Farsi and Lusi. The Farsi are supernatural beings, who’s existence surpasses humans, who built Cocoon. Their relationship with the crystals is unclear. The Lusi are people who were chosen to carry out particular orders from the Farsi. The exact details of those orders are also being kept a secret for now. 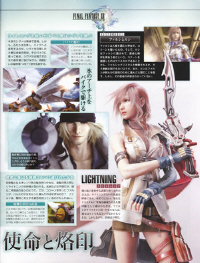 One of the main characters, Lightening, is a Lusi, as she has been chosen by the crystals as “the enemy of humanity who will bring about the downfall of the world.” Incidentally, Lightening is not her real name, meaning we still don’t know the names of any of the FFXIII characters. The magazine also speculates that pigtail girl and the male character who sports a bandanna are also Lusi.

This time summons are in digital form. Past trailers have introduced us to one summon, a version of Shiva which transforms into a motorcycle. The latest Jump trailer, and Famitsu’s as well, were offered a first look at Ifreet and Carbuncle, the latter being a cute creature that should be familiar to Final Fantasy series veterans, and the former a new monster that looks like a cross between a turtle and elephant. The trailer showed Carbuncle emerge from a large laserdisc-like disc when the pig-tailed girl took the disc in her hands. It’s unclear if these two new summons will, like Shiva, transform into vehicles. Summons appear to have a major role in the game. They will be used outside of battle and as part of the story, as shown in the bike transformation sequence from past trailers, where Shiva comes to the assistance of bandanna guy. — Translated by IGN & FFXIII