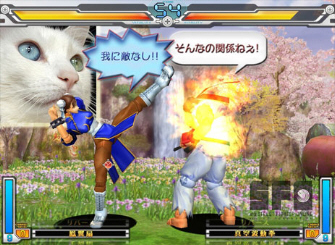 As the Street Fighter Online: Mouse Generation name suggests, the game is built around mouse controls. You control all the action only with the mouse by moving it in the direction you want your character to move or jump, and the left and right buttons perform, respectively, execute punch and kick attacks. Special moves are performed by combinations of the buttons and mouse gestures.

IGN reports that Daletto will be using an item-based business model, where the game is free to download and play online, but you’ll have to hand over cash to purchase items in the form of character body parts. The game will initially start off with just four characters: Chun Li, Ryo, Hiko and Tiran. The last two are characters from the novels of Chinese author Jin Yong. Additional characters will be added gradually, but players are encouraged to create brand new characters by mixing and matching parts. It’s possible to get Chin Li’s head and torso attached to Zangief’s arms and Ryu’s legs.

The game will include community features to keep players coming back. Plans are in place for teams, tournaments, and, eventually, fights featuring more than just two combatants. During gameplay, the game will have a new “cut-in” communication system, which lets players make text bubbles appear above their characters when performing special moves. Replays can be saved and exchanged between community members, who are free to place comments directly in the replay body.

PS: As to why there’s a cat on the in-game screen. That’s part of the “cut-in” communication system that also allows for user-added images during the fights.