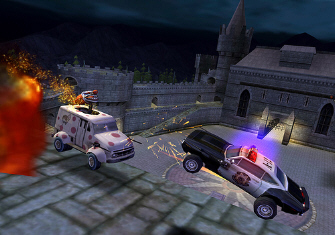 David Jaffe is the director of Twisted Metal: Head On: Extra Twisted Edition that’s coming to PS2 for just $19.99 on February 5th, 2008. Mr. Jaffe revealed new details about the game’s extra features and bonus content. You might already know the game is a port of 2005’s PSP release and will now run at 60FPS with new textures/art and a new level called Transylvania Castle (see screenshot above). The director goes on to describe what extra content is in the box. 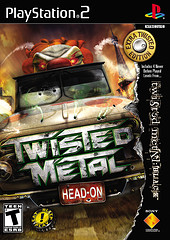 The newly revealed details include:
* The Core Game Itself– Yep, the hit PSP game – Twisted Metal:Head On – is now on PS2. And now it’s running at 60 frames/second, has improved textures and art, and even has a new level created specifically for this version (Transylvania Castle).
* The Lost Levels– Four brand new levels straight out of the dark, demented world of Twisted Metal: Black. These levels are designed with two player deathmatch in mind and I think they are some of the best Twisted levels we have ever made. My favorites are Suburban Terror and Stadium Slaughter.
* The Twisted Metal Symphony– folks who purchase the game will get a free code to let them download a free copy of The Twisted Metal Symphony. TMS is a compilation soundtrack of the greatest musical tracks from TM1, TM2, TM:BLACK, and TM:HEAD ON. Yes, old school TM fans, Rooftops from TM1 WILL be on there!
* A Continuous Suicide Of Reason: The Art Of Twisted Metal- a pack in art booklet filled with concept art dating back to the very first Twisted Metal game.
* The Dark Past– A 30 minute documentary tracing the history of Twisted Metal, the struggles the team went through in making the games, the success, the failures, the fans, etc. Heck, we even touch on what went wrong with TM3 and TM4 and what the original team REALLY feels about those games. It’s a nice little doc that -I feel- is much more honest than the usual ‘making of’ puff pieces you see on a lot of games these days.
* Sweet Tour– This is where you get to take control of Sweet Tooth himself and run him around some levels built for Twisted Metal: Black 2. As you run around, you find icons you can collect. Each icon opens up concept art and behind the scenes information about the making of the series.
* The Lost Ending Movies– Back in 1995, I wrote and directed some live action end movies for the very first Twisted Metal. Because they were deemed too sexist and too violent, they never saw the light of day. But it’s 2008 now and what was once offensive is now just -to most folks- cheesy and charming. So these flicks are on the disc for folks to finally judge for themselves if they are cinematic masterpieces or the final proof of my total lack of talent. I’m sure you’ll let me know which.