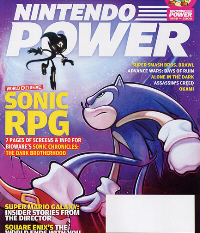 The latest issue of American gaming magazine Nintendo Power has a 7-page world exclusive unveiling Bioware’s Sonic RPG on the Nintendo DS, which is now officially named Sonic Chronicles. The game is set for release in 2008.

The game’s storyline is that Sonic The Hedgehog is on vacation from defeating Eggman two years ago. He gets a call from Tails that Knuckles has been kidnapped by a group called the Marauders, and that 6 chaos emeralds are missing. Eggman is not the main villain. But developer BioWare wants to make him a creditable bad guy again. There will also be a “twist” between Eggman and Sonic that goes back to the earlier games.

Here are the details lifted from the developer interview:
* In-game graphics (backgrounds) have a water color look, all hand drawn.
* 4 party members at a time.
* Each character can do certain things, for example: Tails can float over things (standard stuff).
* 11 party members total — 7 known are: Sonic, Tails, Amy, Knuckles, Rouge, Shadow, and Big the Cat (the developers want everyone to love him).
* Control done fully with stylus — think The Legend of Zelda: Phantom Hourglass touch controls.
* Able to split party into teams at certain moments.
* Rings are used as currency.
* No random battles, see enemies on the field. Battles look to take place in 3D environments.
* Turn based battles, choose commands for everyone in your party before they actually follow through. Want battles to be fast paced.
* Elite Beat Agents style special attacks.
* Team attacks (like Chrono Trigger).
* “Fatigue Points” instead of MP.
* Choose which attributes to increase when you level up.
* Purchase and level special attacks.
* 2 acts — first takes place in standard Sonic areas. 2nd takes place in a darker world.
* Remixed classic tunes.
* “Fully animated cut scenes.”
* Simple dialogue trees.
* Side quests.