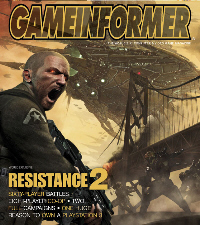 The February issue of American gaming magazine Game Informer has the world exclusive unveiling of Insomniac Games’ Resistance 2 for PlayStation 3. The FPS game is set for release in fall 2008.

The game continues the story of the Resistance: Fall of Man protagonist, Sgt. Nathan Hale, as he fights against the alien-esque “Chimera” forces, set in an alternate timeline around the 1950s, following the events of the first game. The sequel starts as an X-Ray ship carrying Sgt. Nathan Hale is shot down over Iceland. Hale escapes to the United States and becomes part of a program known as Sentinels.

Hype quotes: “Resistance 2 will be too epic to dismiss as anything but one of the biggest, boldest, and most high-reaching titles of 2008. It’s a game that won’t be ignored. — Multiplayer maps are positively huge with an increased focus on individual battle zones, use of cover, and a logical flow of movement, rather than empty haphazard arenas where everybody charges for the center of the map.”

Transcription from Neogaf, screenshot via N4G.