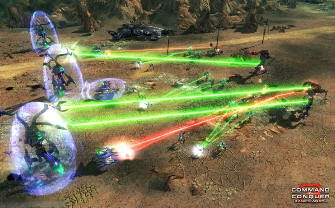 On episode 4 of Command & Conquer: Battlecast Primetime, David and Raj go in-depth on the Xbox 360 version of the Command & Conquer 3 expansion Kane’s Wrath, as well as showing off four new multiplayer maps. Plus, stars Natasha Henstridge and Carl Lumbly share war stories of working for the Brotherhood…

And the maniacal leader Kane himself shows up to challenge a World Cyber Games medalist against the top seed on EA’s ladder tournament. And as always, there’s more explosive action then you can handle with The Battlecast Five’s explosive fan matches, developer commentary on our featured match, Apoc’s Corner, Ask a Dev, and the Firing Squad.

Watch all the video footage in this episode now!