Rockstar Games has announced that Bully: Scholarship Edition will be released for Wii and Xbox 360 on March 4th in America and March 7th, 2008, in Europe. The action-adventure sandbox game will be cost $49.99 and includes the original game along with bonus features that weren’t in the PS2 version.

What are the bonus features in the Wii and Xbox 360 versions that were added to the original PS2 version?
* 8 New missions,
* 4 New school classes (biology, music, math, and geography),
* New unlockable items and clothing,
* New two-player offline minigames,
* New awards,
* And Gamerpoint Achievements in the Xbox 360 version. 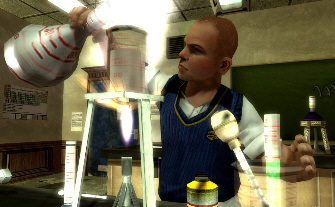 Developed by Rockstar Vancouver, Bully puts you in the shoes of precocious Jimmy Hopkins. Stuck in Bullworth Academy, a stuffy private school for youths, Jimmy must deal with the common problems of youth. There are various cliques from jocks to geeks to socialize with (or avoid), girls to woo, classes to ditch, teachers to mock. This is a game of social networking and in that way a tongue-and-cheek attempt at simulating adolescent life in school. — Via IGN