Home » News » PC News » Real-life Seaman created by Korean scientists. Yes, really, a fish with a human face like in the game.

Real-life Seaman created by Korean scientists. Yes, really, a fish with a human face like in the game. 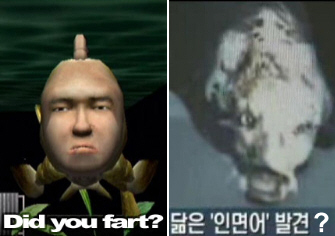 The Sega Dreamcast (PS2, PC) game Seaman featured a freshwater carp fish with a human face and when talked to it displayed a rather bad temper. Korean scientists have now developed actual carp fishes with human faces that look like Seaman! Very bizarre!

The fish is the result of artificial insemination between a carp and ayu sweetfish. As the fish grew larger, the design on the fish reportedly changed to look more like the face of a human being. Rare markings on a fish are considered a good omen in some Asian countries, according to a report, which does not clarify if the fish curses like a sailor that sounds like Leonard Nimoy.

I have to gloat for a moment and say I’m very proud of the comedic comparison picture I edited together up there.