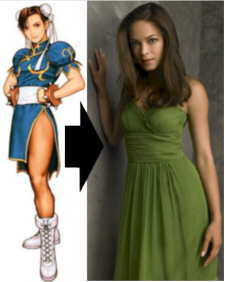 Smallville TV show star Kristin Kreuk will play as Chun-Li in Street Fighter: Legend of Chun-Li! Directed by Andrzej Bartkowiak from a Justin Marks script, the action movie will start filming in Thailand in March, 2008.

20th Century Fox will distribute the live-action film based on Capcom’s fighting video game. The movie is focused on female fighter Chun-Li and her journey for justice.

The following Kristin Kreuk video is a fan-made movie starring Kristin Kreuk (playing Lana Lang, Clark Kent’s love interest) from the popular TV show Smallville chronicling Superman’s younger years. The scenes show off her moves as she gets “infected with special asskicking powers.” That’s not really what someone from the film said, I felt like quoting myself. Enjoy the video!