Resident Evil: The Umbrella Chronicles is a brand new Wii-exclusive game in the Resident Evil franchise, with familiar locales from the entire series. This action/shooter hybrid reveals the back story behind the fall of the Umbrella Corporation by exploring locations from Resident Evil 0, 1, 2 and 3 as well as new never-before-seen locations, such as Umbrella’s stronghold. 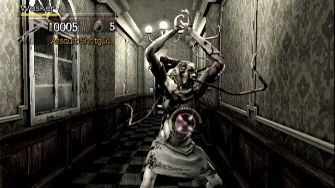 The Umbrella Chronicles is an on-rails shooter. Players follow a pre-set path, shooting enemies and picking up optional weapons and health items, occasionally choosing between multiple paths. Using the analog stick on the Nunchuk, players can look around in a limited manner. In some cases, the Wii Remote can be used to activate melee weapons against enemies where the camera shifts to a third-person view, or use timed button presses in certain cutscenes to evade traps and enemy attacks.

Each stage is split into individual chapters and contains save checkpoints at the end of each chapter. Stars are obtained at the end of each stage, based on the player’s performance, which can be used to upgrade weapons. To unlock some levels and sublevels, the player needs a certain ranking, “S” being the best. The amount of destroyed items, obtained objects, files, critical hits and clear time affects this.

Upon beating HUNK’s fourth survivor mission, the co-op mode will be unlocked for all the missions. When selecting characters, an option will appear on the screen to select co-op mode. Both players will play as the same character, but each player will have their own aiming reticule.

So what are main features of Resident Evil: The Umbrella Chronicles?

* The overriding story of Wesker’s return and the unveiling of new details about Umbrella link together the chapters as players revisit classic scenarios from previous Resident Evil games in full 3D.
* Return to classic locations such as the mansion from the original and Resident Evil 0, and elements of Raccoon City from Resident Evil 3 that lead players to a brand new chapter set in Russia.
* Chris Redfield, Jill Valentine, Rebecca Chambers, Billy Coen and Carlos Oliveira are all available as playable characters. Other key characters from the Resident Evil series, including Albert Wesker make appearances during the course of the game, as well as doomed ones like Richard Aiken from the S.T.A.R.S. Bravo Team.
* Using the Wii Remote as a gun, players can experience breathtaking combat against a horde of zombies and various creatures in dynamic first-person perspective.
* Support for Wii Zapper provides an even more satisfying, immersive experience.
* Single player or two-player co-op.
* 480p and 16:9 Widescreen support.
* Certain weapons can destroy environments and items. Shoot objects and watch them splinter, explode and disintegrate.
* Interactive paths allow you to choose various routes and pathways through the game, allowing for multiple levels of replayability.
* Switch between pistol, rifle, shotgun, machine gun, rocket launcher, knife and grenades to defeat enemies.
* Replay the game to achieve higher rankings and access to upgraded weapons. Master the game and achieve an Excellent Ranking to obtain a secret item.
* Destroy items to find hidden pick-ups providing key information that reveal vital details about Umbrella.
* Certain weapons can destroy environments and items. Shoot objects and watch them splinter, explode and disintegrate. Hidden items may sometimes be found after destroying objects.

In conclusion let’s see how much fun Resident Evil: The Umbrella Chronicles is on a scale from 1 to 10?

FUN FACTOR – 8.0
For the seventh main installment in Capcom’s Resident Evil series, The Umbrella Chronicles may be different by being an on-rails shooting game, but it’s loads of fun if you’re into arcade shooters and the tight corridors actually make the horror game scarier. And trust me the flashlight sections later on in the game ARE scary. Boss battles are really tense too and you’ll likely end up having to redo them quite a few times. Whatever control method you choose (Wiimote or Zapper) killing zombies feels satisfying!

To top it off, it looks great, all 22 levels have great 3D graphics (on par with Resident Evil 4) and you get to revisit every Resident Evil game from 0 to 3 and find out in the ending sections what happened between Resident Evil 3 and 4 to the Umbrella Corporation. Talking about endings, do yourself a favor and sit through the credits and wait until after they are done rolling to get the full story. If you’re a fan, buy it; if you’re in doubt, rent it. Whatever you’re thinking, it’s once again time to kick some zombie ass!

Graphics – 8.0
You’ll return to many familiar Resident Evil settings, this time in full 3D. Visual effects like the flashlight look great, very fluid animations, and they make the surrounding environments shine… well you know what I mean, it looks pretty on the Wii, similar to Resident Evil 4 Wii Edition. Character models are impressive too. The scripted scenes / cut-scenes in between gameplay sections / levels are pre-rendered and do a great job of tying the story together as it’s told as a report on the events that happened. Whether I was playing alone or with a friend, thanks to this I felt really immersed into the game world.

Audio – 8.0
The voice acting in Umbrella Chronicles is what you’d expect from a Resident Evil horror game, fitting but oh so corny! The background music and sound effects are classic zombie-style audio, very spooky and fitting.

Ingenuity – 8.5
The game’s controls focus more on precision aiming, rather than quick reactions. So while zombies suddenly jumping you might scare the living daylights out of you, you’ll have to keep in mind you can’t freak out and have to aim at the displayed hitpoint as other spots on the bodies of your enemies don’t seem to have any effect. I stuck with the default control layout and that works well in targeting enemies, grabbing extra items, switching weapons and throwing grenades with one hand. The last-minute defense backup is your knife that you use by pressing A, sadly it would’ve been more fun if you could’ve controlled the slicing movement. Like any shooter you’ll find in arcades, reloading is as straightforward as the rest of the controls, just shake the controller down and up and you’re good to go again. Then there are the context-sensitive moves and (press-the-button) counter moves you might know from Resident Evil 4, they’ll give you a lot exciting moments. The ability to look around a little bit using the nunchuk’s analog stick can help spot some much needed health or ammo.

The advantage of using the Wii Zapper during gameplay is that you won’t need to shake the controller to reload (you move the nunchuk instead as you can see in the trailer above) and thus your aim stays on target. Capcom’s intent with this latter control method is to give the game a light-gun arcadey feeling.

Replay Value – 7.5
Expect to play through the game in an evening or up to nine hours. The levels can also be played with someone else locally via the co-op option, since this makes the game easier, the two of you will share a lifebar to bring back the “watch out!” close-corner anxiety as you’ll both need to dodge attacks to survive. It’s great multiplayer fun. There are plenty of alternative routes through levels to make you return for new bonus items to collect (to unlock enemy file pages, character, items and weapons), score well each level (might take a few retries) and you’ll get more stars to upgrade your weapons, which will all help extend the playtime.

The game is a recreation of memorable moments from all the past games (and then some), as a result it embodies how fan service should be done, and for that experience alone anyone who likes the Resident Evil games/movies or arcade shooters in general should play it at least once. Besides, you’re not really going to wait two years till 2009 to play Resident Evil 5 are you?