Today Nintendo adds new classic games to the popular Wii Shop Channel. The games go live at 9AM Pacific time. Wii owners with a high-speed Internet connection can redeem Wii Points to download the games. Wii Points can be purchased in the Wii Shop Channel or at stores like Amazon (see to your right).

We’ve included videos of each of today’s games for nostalgia’s sake or so you can see if it’s for you.
This week’s new games are:

Cybernator (SNES, 1 player, rated E 10+ for Everyone 10 and Older – Mild Fantasy Violence, 800 Wii Points = $8): It is the near future. Resources are dwindling, and the major powers of the world are in dispute over territory. Pilot the Cybernator G5-E for the 95th brigade of the mechanized marines and throw yourself into the war. Get briefed before each mission to confirm your targets, and then do your best to clear each of the seven stages, freely using the suit’s equipped tools and four types of weaponry. By collecting the “power chips” left by defeated enemies, it is also possible to reinforce each weapon up to a maximum of three levels. It is left to your judgment as to whether to reinforce a specific weapon or to power up all weapons simultaneously, adding a bit of strategy to the nonstop action. The powerful background music, military-like atmosphere (look for bullet marks on the walls and the strained communication during combat) and intense story development combine to give the world of Cybernator a gritty, sci-fi feel that you won’t soon forget.

Alien Storm (Sega Genesis, 1-2 players, rated E 10+ for Everyone 10 and Older – Mild Fantasy Violence, 800 Wii Points = $8): Shape-shifting aliens have infiltrated the city, creating chaos and panic! Fortunately, a trio of heroes called the Alien Busters has agreed to wipe out the invading creatures. The members of the team wield their own special attacks, and they unload a world of hurt on the Martian menaces from the city streets to the mother ship. Gordon, a tough guy with a bazooka, has a special gunship attack, while Karla has a flamethrower for alien crisping, though she prefers to use her special ballistic-missile attack. Finally, Slammer the robot can self-destruct at will and attacks the intruders with an electric whip and other devices. Take the aliens by storm and save your city. 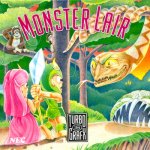 Monster Lair subtitled Wonder Boy III (TurboGrafx16 CD-ROM, 1-2 players, rated E for Everyone – Mild Cartoon Violence, 800 Wii Points = $8): Join young Adam and Laura as they embark on a fantastic adventure in this comical action/shooting game. Featuring beautiful music brought to life by the power of the CD-ROM, the game consists of 14 rounds packed with cute monster enemies. Players can either play alone as Adam (or play with a friend controlling Laura) as they battle their way through round after round. The first half of each round is the action scene, where players must avoid obstacles and pits. Use your Power Boost weapons against enemies and restore your Life Force with food as you head for the gate at the end. The second half is the exhilarating shooting scene, where players must shoot down flying enemies. Take out the boss at the end to clear the round and move to the next one.