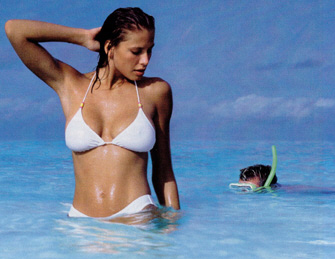 As you can see from the above photo, there are many fish in the Spanish seas. Yeah, I looooved snorkeling there. I remember well when I was a kid on holiday in Spain and especially Tunisia, where there’d be these beautiful Mediterranean coral reefs sparkling with life. I always wished I could dive deeper where different fish swam, but all I had was a snorkel, so the depth I could dive to was limited to how how many minutes I could hold my breath.

And it’s pretty scary to not be able to see all the way to the bottom, the result of far too many Jaws movies no doubt. So how great is it that Nintendo released a diving exploration game in which you can’t even die.

Endless Ocean (known as Forever Blue in Japan) on Nintendo Wii is a diving simulator and the sequel to developer Arika’s PlayStation 2 game Everblue 2 and it’s the perfect relaxation dive into the (deep) sea.

It’s time to explore what makes this Touch Generation! game so different from all the puzzle games associated with the series.

Dive into tropical waters and discover an underwater paradise that has to be seen to be believed, or as Steve Zissou might describe it “the life aquatic, a life of nature, beauty and intrigue”. In Endless Ocean, you are the guest of a tranquil sea filled with stunning seascapes and marine life so unique they must be experienced up-close.

Endless Ocean is more of an experience than a game of any sort, it gives you the freedom to explore underwater locations, searching for fish to photograph and record in your journal, or simply take a relaxing swim among the inhabitants of the sea.

You’ll be able to directly interact with some species, using the Wii Remote to touch members of the undersea community. Come face-to-face with such animals as angelfish, penguins, walruses, and dolphins. While underwater, you can even find lost ruins and secret diving locations. By pressing the 2-button you move the perspective from third-person to first-person, making everything more realistic. 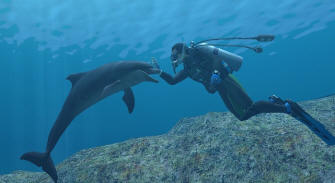 The Wii Remote’s pointer capabilities are used to easily navigate through most of the game’s depths of the ocean, whether it’s directing the ship to a location on a map, interact with the ocean life like fishes and underwater plants and even artifacts you find, or directing the diver which way to swim. When you want to interact with ocean life, you’ll simply point at it and then press the A Button.

By doing so, you’ll discover new species and build up your fish log. What’s more you can also befriend companions like a dolphin which will become your partner and with whom you can train and swim with.

In addition to searching the vast waters of your fictional Manoa Lai Island, you can share the game’s Friend Codes with a friend and explore his or her sea via the internet Nintendo Wi-Fi Connection. Dive together and share in an adventure.

Other Endless Ocean key features include:

* Have a certain song you like as a diving soundtrack? Endless Ocean supports MP3 files. Simply load your MP3 on a SD card and put it in its proper slot. Before your dive, find your song on you boat’s radio, and you’re ready to go. I suggest the new age songs of Irish singer and songwriter Enya Brennan. Enya sang several songs in Tolkien’s Elvish languages for the soundtrack of The Lord of the Rings movie trilogy.

* Dive with a friend via Nintendo Wi-Fi Connection! Exchange Friend Codes and take a dip in your friend’s waters. You can use all the tools available in single-player mode in addition to the ability to communicate by using the +Control Pad and choosing from preset phrases.

* Befriend a dolphin to gain access to a number of mini-games and have yourself a travelling companion.

In the conclusion let’s rate how much fun Endless Ocean is on a scale from 1 to 10?

FUN FACTOR – 8.5
A casual and very fun diving sim. The beauty of Endless Ocean is that you can do as much or as little as you’d like. The relaxed and calm atmosphere of the game gives divers the freedom to explore locations such as shipwrecks and underwater ruins, discover and interact (pet, nudge, feed, draw, photograph, whistle, train) with sea-life, complete fish logs or simply relax in the soothing environment. Stay away if you have a short attention span, but highly recommended to those looking for that holiday feeling.

Audio – 8.0
The environment and animal sound effects are fitting. The relaxed setting is further heightened with a tranquil soundtrack from New Zealand songstress Hayley Westenra. You also have the ability to listen to your own MP3’s via the Wii SD Card slot while you dive. Previously, only Excite Truck offered this feature on the Wii.

Ingenuity – 9.0
Your marine life expert friend Catherine, who hilariously can’t swim and thus wears a lifejacket the entire time, helps you understand how to play the game and guides you all the way through. With no time limits, point systems or possibility of failure, it’s a pick-up-and-play game for the entire family to enjoy. While the auto-guiding Wii pointer might take a while to get used to, overall the intuitive one-press controls and the game’s encouraging “explore at your own pace” approach create a momentary retreat.

Replay Value – 8.0
Expect many hours of entertainment out of this budget title. For anyone really looking to kick back and relax Endless Ocean features several soothing modes. Single players has you diving at different times of day and season with a fish logbook to complete, items to be salvaged and collected, giving tours to build your reputation, training your animal partner dolphin, orca, etc.

Play multiplayer by opening the boat’s gate and going online to swim around with a friend in this co-op mode where you have access to all the tools that can be used in single player mode, as well as an additional mode of communication controlled with the D-pad (greet, instruct, reply).

But you’ll most likely end up being called back to the game to swim around lagoons and the deep sea during the day or at night, and on the deck of the boat is a deckchair that allows you to sit and watch the sea, it’s like being on a mini-holiday. Alternatively in the aquarium section of the game you can select fish you’ve encountered and add them in an aquarium for a closer inspection. What’s more this even doubles up as a tranquil screensaver if the Wii Remote is left untouched. Don’t let the relatively short story fool you, after you “finish” it, you’ll unlock a new area to explore. Point and case, there’s plenty to do at your own leisure.