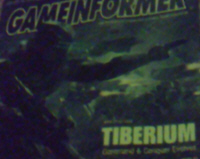 A Command & Conquer FPS game called “Tiberium” will be coming to PC, Xbox 360 and PlayStation 3, according to American games magazine Game Informer. The Tiberium game is the cover story of their January 2008 issue and the game is said to be set 11 years after the end of the third Tiberium war. You’ll play as Ricardo Vega, a formerly-retired GDI field commander. You can play in single player or 2-player online modes. EALA’s game is set for a late 2008 release.

The squad-based action first-person-shooter game is described as Ghost Recon Advanced Warfighter meets Battlefield meets Rainbow Six Vegas, but instead set in the C&C Universe. You’ll be leading a R.A.I.D (Rapid Assault and Intercept Deployment) around the location of the tower in the Mediterranean Red Zone that NOD defended until it was built. There’s no mentioning of you fighting NOD, but you will be fighting new Scrin infantry (the two given were Shrikes, little knee-high robots with blasters an a self-destruct, and Archons, think Scrin versions of Elites from Halo).

The units that were announced that you could command were standard infantry squads, missile infantry squads, a different version of the Titan, and new Orcas. You’ll still get special powers, like an “Orbital Slug” that you can call upon to strike down your enemies. Ricardo Vega himself is armed with the GD-10, a transformative, four-in-one weapon capable of dealing punishment under any circumstance. — Thanks to AJsarge for the writeup

Looks like a Command & Conquer: Renegade 2 will be reincarnated as Tiberium, let’s hope GDI, NOD and Scrin will all be playable. We’ll update this article as soon as there’s more info and pictures, sadly a leaked demo reel has already been taken offline by EA. Here’s a blurry first shot saying “the fight is far from over”: 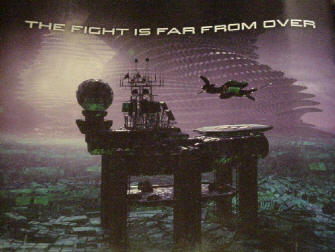 Tiberium executive producer, Chris Plummer, says about the game “Tiberium is our force, it’s our one ring to rule them all, it’s our Matrix.”