Get ready for a galactic adventure filled with explosive mayhem as the Ratchet & Clank series makes its PlayStation 3 debut. Ratchet & Clank Future: Tools of Destruction marks the beginning of a brand-new series of next-generation games for our gadget-building hero, Ratchet, and his brainy robotic sidekick, Clank.

After saving countless planets from dreadful doom and earning intergalactic mega-celebrity status in the process, Ratchet and Clank have taken some well-deserved R&R. Yet, Ratchet remains restless. An orphan of the universe, he has never known anything of his past, his family, or his Lombax origins. And no one, not even Clank, can fill that void. Unfortunately for Ratchet, someone else is equally interested in Ratchet’s origins: Emperor Percival Tachyon. In his thirst for revenge, the vile tyrant of an ancient race of foul insect-like monsters called Cragmites has festered an age-old grudge and is bent on wiping the last-known Lombax off the universe! 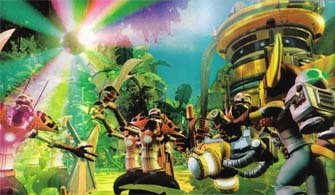 Ratchet and Clank are enjoying a vacation in Metropolis, where Ratchet also reconnects with Sasha. Suddenly, Captain Qwark sends a distress signal to the duo, informing them that an unknown robotic space armada is attacking the city, before the connection is lost. The duo are caught in the middle of a full-scale invasion led by Emperor Percival Tachyon, a being known as a “Cragmite”. In the midst of the chaos, Ratchet realizes that he was the intended target of the invasion. Ratchet and Clank narrowly escape the planet on one of the Cragmite ships, hoping to track Tachyon down, and the ship touches down in the Polaris Galaxy.

Upon arrival, an unknown girl named Talwyn, recognizing Ratchet to be a Lombax, reveals the reason behind the invasion; The Cragmites are all but extinct after the Lombax race wiped them from existence, and Tachyon, the last of the Cragmites, is hell-bent on wiping out the Lombaxes for revenge. Ratchet is the last known Lombax in the universe, and as such is the target of all of Tachyon’s robotic forces (Ratchet also is revealed to not know anything of his past, family, people or even his real name and no one, not even Clank, can fill that void). Talwyn also tells them of the “Lombax Secret”, apparently something which Tachyon is desperately trying to obtain, and as such, Ratchet and Clank begin exploring the galaxy for clues on Ratchet’s origins. Clank also has his own side story which involves extra-temporal aliens that only he can see, known as the “Zoni”, some of which unlock powers Clank never knew he had.

What are Ratchet & Clank Future’s cast of characters that drive the story? 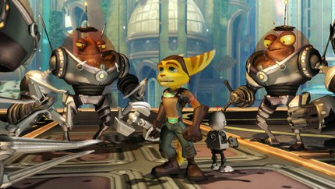 * Ratchet — The main protagonist of the series. His origins are deeply explored throughout the duration of the game. 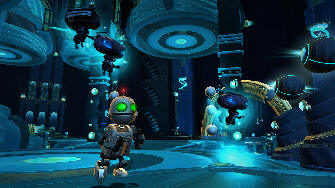 * Captain Qwark — A bumbling superhero who aids both Ratchet and Emperor Percival Tachyon. 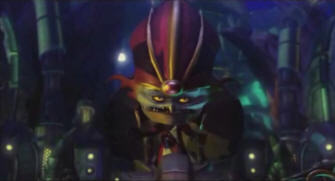 * Emperor Percival Tachyon — The last Cragmite who wants to kill Ratchet and dominate the universe. 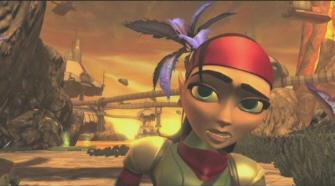 * Talwyn — A girl who works with Ratchet and Clank along their way. Her father was last seen searching for the “Lombax secret.” 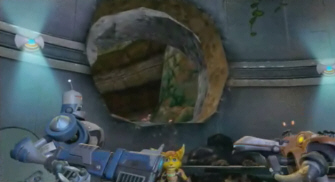 * Cronk and Zephyr — Talwyn’s robotic guardians who despise each other. They are meant to represent the PlayStation 3 and Xbox 360 (actual codename: Zephyr) respectively, constantly mocking each other for their technical faults and praising their own abilities, like fanboys do. 😆 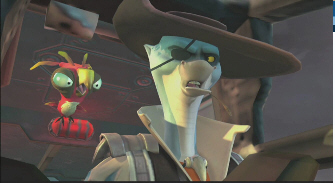 * Captain Slag and Rusty Pete — The leader of a pirate group and his right hand man, respectively. They were created by Tachyon and now operate an annoying pirate radio station. 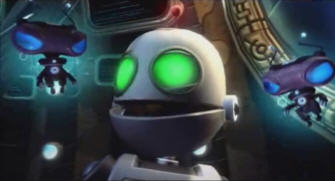 * The Zoni — Ghost-like robots which Clank controls like the Gadge-a-bots from previous games. 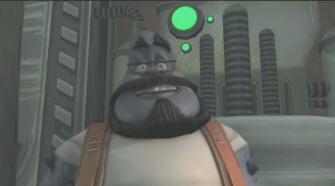 * The Plumber — A recurring character who gives the duo advice and gives them challenges to get through and get rewards.

* Insomniac Games has overhauled its proprietary PS3 engine technology to create the most visceral Ratchet and Clank universe yet, overflowing with exotic creatures and flying vehicles.
* Experience many more objects on screen and in more intricate detail than what was possible on PS2 Ratchet and Clank games.
* The PS3 system’s superior power enables Ratchet and Clank Future:
* Tools of Destruction to bring vivid worlds to life with increased draw distances, enhanced lighting and shadowing, and more fluid and exaggerated animations.
* Discover an all-new galaxy spanning vast worlds such as a majestic cloud city and a space-age amusement park.
* Encounter an entirely new cast of expressive characters (and some old favorites) as well as the introduction of a variety of new alien races and life forms.
* Experience a more emotive Ratchet with nearly as many animation joints in his face (90) as PS2 Ratchet had in his entire body (112). This joint density applies to many of the characters featured in Ratchet and Clank Future: Tools of Destruction, enabling more detailed, personable and expressive characters.
* Clank returns as a playable character, and Ratchet will have new enhanced abilities.
* Fire a fully stocked arsenal of all-new weapons such as the Plasma Beasts and Tornado Launcher, which uses the Sixaxis controller to direct tornadoes that suck up enemies and whip them around with debris, while you can control Ratchet at the same time.
* Use the Sixaxis controller to maneuver, destroy enemies and solve puzzles.
* Upgrade and customize weapons with a new system that provides greater power and flexibility. Players also will have the ability to upgrade Ratchet’s armor.
* Utilize Ratchet’s new supply of consumable “on-demand” combat devices, such as the Groovitron, which causes enemies to dance uncontrollably to ’70s disco hits.
* Gadgets gameplay returns as Ratchet and Clank will have more gadgets at their disposal to help them bounce, fly, evade and defy gravity.
* Pilot Ratchet’s ship through asteroid fields while trying to destroy enemy fleets in a complete redesign of classic Ratchet and Clank space combat gameplay.
* Rumble functionality is already in the game. But it cannot be experienced before the Sony DualShock 3 controller is released for PS3 in early 2008.

As you might already see from the above screenshots and trailers, in the conclusion let’s try and describe the kind of exciting and interactive Pixar movie-like trip Ratchet & Clank Future: Tools of Destruction will present you with.

If you own a PS3, Ratchet & Clank is THE must-have game! Great controls, beautiful graphics and a bombastic soundtrack. Even if you have an extreme dislike for platformers, you should still get this, just let someone else play it for you. Seriously, experience it. You’ll be rewarded with a highly polished, well paced, game. While the difficulty is easy until the last part of the game, the action-filled adventure has a weapon selection that’ll make your heart skip a beat and a fantastic sense of humor that draws you into the story till the end.

Graphics – 9.5
These are the unbelievable next-generation graphics that put you in control of a CGI movie-quality world. The special effects are fantastic with weapons like the Groovitron disco ball. There’s so much attention to detail in the colorful futuristic worlds you travel, you can look anywhere and you’ll see some new visual details, for example cars or dinosaurs flying by in the far distance, which all makes the worlds feel very much alive.

Audio – 9.0
The musical score and environmental sound effects are superb, especially with a 5.1 surround set. The dialog the actors deliver is often hilarious to the point where you’ll find yourself laughing out loud. Not surprising, because there’s enough cutscenes in the game to fill a feature comedy film. There’s a good mix between drama and humor in a great storyline that can be enjoyed by players of all ages.

Ingenuity – 9.0
It plays as good as it looks. The face button controls are spot-on. At points the game even uses the tilt functionality of the Sixaxis controller to to control some weapons and gadgets, such as steering the path of a mini-tornado, and outlining a path for a laser-cutting tool. There are lots of weapon variations to try out too, like first catching enemies in a mag-net before finishing them off with the razor claws. More variety is brought onboard by offering different Ratchet, Clank, and flight ship gameplay sections, as you attempt to save the galaxy. The game ends up sticking to what works well in platformer-shooters and nearly perfects it.

Replay Value – 8.0
The game will last you about twelve hours. And once you’ve finished the game once, you can play through it again on a harder difficulty with more bolts to collect and all your weapons still present from the previous play through, so you can upgrade them further with the experience points and add all their secondary fires. I think that if you have a big 1080i HDTV, a 5.1 surround set and a PS3 at home, you’ll get a real kick out of what’s here for your $60… the first game that plays like a Pixar CGI animated movie and has the awesome gameplay and humor to back it up. It’s a fantastic experience all the way through. By the end you’ll already be wanting Ratchet & Clank Future 2.