Heavenly Sword is emotionally charged, stunningly beautiful and delivers dramatic character performance, as such its best described as a blockbuster action movie turned video game. The third-person action-adventure beat-’em-up is a graphical showcase for the power of the PlayStation 3.

Andy Serkis, the world’s leading CG actor, famous for his roles as Gollum in “The Lord of the Rings” movies and Kong in “King Kong”, was heavily involved in the creative process. As well as starring in Heavenly Sword as the villain, King Bohan, Andy was a major contributor to the character development, writing, casting, directing and performance capture for the PlayStation 3-exclusive game.

Read on to find out if Heavenly Sword is as heavenly as it promises. 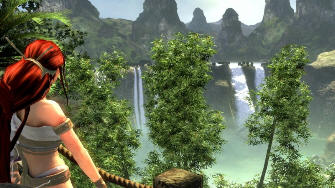 What’s the story about? First you should download the animated prequel episodes off the PlayStation Store or watch The Legend of the Sword videos in five parts. These videos show (1) where the heavenly sword is from, (2) the clan protecting the sword, (3) the origins of Bohan, (4) the divine birth, (5) Nariko’s training when she was a child and battles before the game starts.

The game tells a dramatic tale of revenge that sees Nariko, a fiery red-haired heroine embark on a quest for vengeance against an invading King and his army. The story builds around the ancient Heavenly Sword which once belonged to a powerful deity. It can never be wielded by a mortal without it draining their life-force, killing them within hours.

When the invading King destroys the warrior clan that guards the Heavenly Sword, the clan leader’s daughter, Nariko, takes up the sword in a desperate fight for survival. Nariko must now pay the ultimate price as she embarks on one last mission of vengeance against the King and his army before her life is finally drawn to a close…

What’s Heavenly Sword’s cast of characters that drive the story? 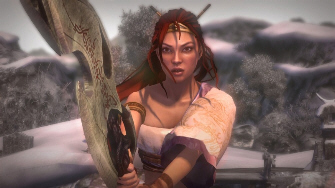 * Nariko (portrayed by Anna Torv) is the main character of the game, a young warrior who belongs to a clan headed by her father, Shen. A prophecy once foretold that a son would be born who would act as a saviour to the clan; with the birth of Nariko, a daughter, the clan have come to shun her, and even go so far as to blame their misfortunes on her. After King Bohan launches his destructive tirade to find the Heavenly Sword that the clan protect, Nariko decides to wield it herself as a final act to avenge the people who sacrificed themselves fighting to defend it. 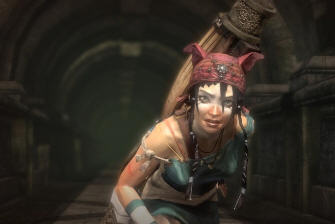 * Kai (portrayed by Lydia Baksh) is the adopted sister of Nariko, and a member of the clan which protects the Heavenly Sword. She is a child-like character who seems innocent, but is highly skilled in the use of her crossbow, a “game” which she names “twing twang” (yes you may chuckle). Previously belonging to a once-great clan, Kai is the last survivor. Kai was eventually found by Nariko and her clan. She is extremely attached to Nariko and will often disobey orders from Shen or other clan members to assist her. 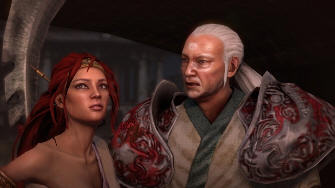 * Shen (portrayed by Ewan Stewart) is both the father of Nariko and the leader of the clan that protects the Heavenly Sword. He acts as Nariko’s fighting tutor first and father second. For ages he has protected the sword from the forces of evil and corruption. He was once a fellow student with King Bohan before they became the leaders of a separate clan and kingdom, respectively. 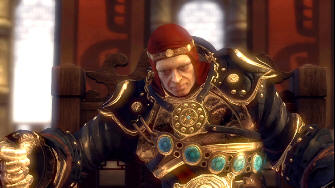 * King Bohan (portrayed by Andy Serkis) is the main villain in Heavenly Sword. Bohan is a power crazed king desperate to get his hands on the Heavenly Sword. He leads his army in a search to obtain it, attacking Nariko’s clan in the process. Clearly he wasn’t satisfied with just Kratos’ armor and Blades of Chaos. The King obeys and worships a crow which has a gold face plate covering its face. 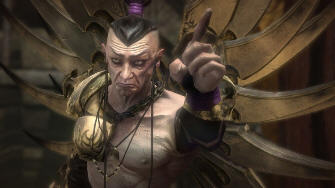 * Flying Fox (portrayed by Steven Berkoff) is the first of King Bohan’s war generals. Flying Fox is a rather shifty character, who is capable of appearing in a different spot in an instant. His back is covered with several metallic wings on both sides. 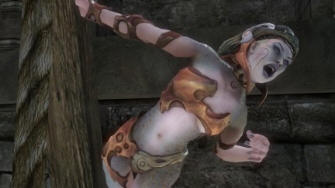 * Whiptail (portrayed by Race Davies) is King Bohan’s lover and mistress. She has a moray-like like appearance with a tail, forked-tongue, gills, and sharp pointy teeth. 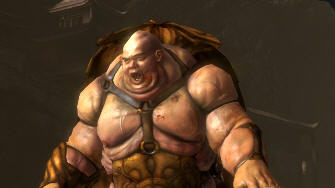 * Roach (portrayed by Richard Ridings) is King Bohan’s illegitimate son. Roach is mentally slow and he often seeks his father’s approval. He is very large in stature and his torso resembles a roach’s thorax.

This video shows all these characters.

What are Heavenly Sword’s action features?

* The Heavenly Sword itself can Transform into Three Distinct Stances –- Players can switch between Nariko’s sword on the fly allowing players to create their own fighting styles. Speed Stance, the default, provides an even balance between damage and speed, where the sword takes the form of two separate blades. Range Stance allows fast, long-ranging, but weaker attacks, with the sword resembling two blades, chained together. Power Stance is the most powerful, but slowest style, where attacks are made with the Sword in the shape of one large, two-handed blade, but you will not be able do defend yourself in this stance.

* The Combat Engine can Scale Up –- From sophisticated one-on-one encounters to one-on-many, where enemies employ intelligent squad-based dynamics, right up to combat against battalions pushing real-time gameplay and AI to unprecedented new levels.

* Physics-based Combat –- Players can sweep debris against opponents, kick tables to halt an oncoming surge of fighters, smash the enemy into the scenery or throw bodies into other enemies using aftertouch slow-motion controls. Thanks Havok physics engine!

As you can already see from the above screenshots and trailers, in the conclusion let’s try and describe the kind of exciting and cinematic adventure Heavenly Sword will take you on.

FUN FACTOR – 9.0
Nariko is sometimes jokingly referred to as the Goddess of War, but make no mistake, Heavenly Sword will be its own franchise. It’s more than just a beat-’em-up, the different fluid combat styles, pick up and play style of the game has a flair of its own. The fact that it’s a gobsmacking beautiful game, and Nariko being an undeniably strong and sexy lead, don’t hurt its allure either. Very fun to play through from start to finish! Or is the start the finish?

Graphics – 9.5
Heavenly Sword excels with a fantastic art direction that’s accomplished through motion/performance captured facial animation, realistic skin tones, and hand-animated sequences that you have to have seen at least once in your life. The way the game seamlessly gives you cinematics, gameplay and context sensitive actions, works superbly. On a big HDTV with 720p it’s a treat, no doubt on of the best looking titles (if not THE best looking title) of 2007. I also played this on a non-HD screen and it’s doing yourself a disservice with much less detail graphically. The game’s not getting a perfect score, because there are framerate drops, but once you see everything that’s going on at once on-screen, all will be well. B-E-A-utiful!

Audio – 9.0
The orchestral ethnic soundtrack and environmental sound effects shine with a 5.1 surround set. The dialog the actors deliver draws you into the story, they really outdo themselves engaging your emotions, a good mix between drama and humor. Like the options in DVD menus, you can change the spoken dialog to 11 different languages from English to Spanish, etc.

Ingenuity – 9.0
It plays as good as it looks. The three different power stances and the moves and (aerial & super style) combos Nariko can do with the heavenly sword(s) are awesome, there’s an equal focus on both offense and defense to keep fighting fresh throughout the game. The combat even makes use of the Sixaxis’ motion controls to aim every object you throw or shoot. A fun diversion, if just that, a diversion. Shooting Kai’s arrows into someone’s head in slow-motion does feel very satisfying on the tougher missions.

Replay Value – 7.0
The game will last you about six to eight hours. It’s a fantastic pleasure for your senses all the way through, but unless you want to play it again to get all the medals to unlock lots of extras or try the new hell mode, it’s not likely you’ll return. I think that if you have a big HDTV, a 5.1 surround set and a PS3 at home, you really shouldn’t be looking at replay value and enjoy what’s here for $60… an action-packed fantastic sounding and beautiful looking experience.