In Screwjumper you rocket down perilous enemy mineshafts, destroying everything you can smash into along the way. 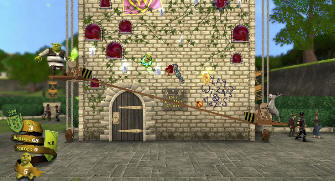 In Shrek-n-Roll you join Shrek, Fiona, Donkey, Puss in Boots and 20 other twisted fairy tale friends in this addictive and hilarious puzzle game designed for ogres of all ages! Navigate through 16 challenging mazes across four unique evironments in Far Far Away’s newest competitive tournament. Test your tilting and rolling skills in Single Player mode, challenge others in Versus mode, work together with friends and family in Co-op mode, or gain bragging rights with the highest points in Score Attack mode.

Tomorrow, November 15th, Microsoft are celebrating their five-year Xbox Live anniversary by giving away the Arcade title Carcassonne for free from November 15th at 12:01am PST to November 16th at 11:59 PST. And those of you that have been on Xbox Live since 2002 will see 500 Microsoft Points credited to your accounts.