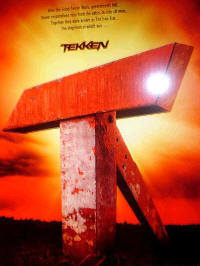 A Tekken movie has apparently been in production for over five years, with the first word on the project dating back to February of 2002!

News of the movie since has been non-existent, although now Coming Soon is reporting that Sony Picture’s Screen Gems will now be distributing the movie (which I’d bet will also pop-up exclusively on a PS3 near you when it actually comes out) and the first teaser poster has been spotted.

The teaser poster simply shows a large, stone or metallic T structure rising up as well as the cryptic words:
After the Great Terror Wars, governments fell…
Seven corporations rose from the ashes to rule all men…
Together they were known as The Iron Fist…
The mightiest of which was…
Tekken

Sounds “meh” already! 😛 What I’m wondering is whether or not this is live-action or animated . . . but let’s hope it’s better than the Dead or Alive flick, or at least more true to it’s source material . . .

What is also very interesting is that, in the same story, Coming Soon reports that an Onimusha film is also in the works and will start shooting in April . . . No release date for either film has been announced yet.