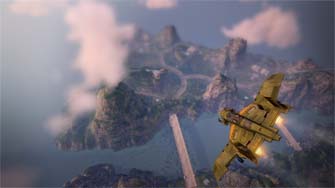 The team behind Warhawk on PS3, Incognito, is hard at work on improving the game with support and updates with the Warhawk Patch 1.1. To quote Dylan Job, Game Director of Warhawk:

“We’ve also been working on a lot of fixes, server-side updates and client patches. Because lets face it, while the team and I were really happy with our launch and players around the globe were having a blast playing, there were some problems that players encountered once we rolled the game out to the masses (stats, connection issues, etc). I’m not going to sugar coat that with a strawberry-flavored, pink, PR candy shell – it’s the truth.

All of that said, we have been hard at work to address the big issues that our Warhawk community currently is experiencing. We have already addressed the majority of our stats-related issues with the deployment of a few server-side updates. These were updates that we rolled out “on our end” without any of the players having to download an actual Warhawk patch. These updates also fixed many of the connection issues. But not all.”

Which is why the Sony blog mentions Warhawk Patch 1.2 is already underway and the game will get moderator that can report/ban cheaters.

The changelist for Warhawk Patch 1.1 includes: