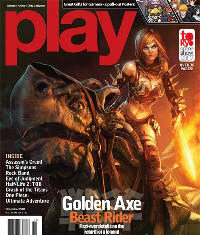 The October 2007 issue of Play magazine has revealed new details. The game will feature the return of Tyris Flare, the female amazon warrior from the first installments of the series. With a heavy focus on riding beasts, it will target a mature public since dismemberments, decapitations and nudity will be present. According to the magazine, the game is no longer on PS3 (or Wii) and is now a Xbox 360 exclusive. Golden Axe: Beast Rider will be released sometime in 2008.

Sega described the game as: “Golden Axe delivers action-RPG thrills as a small band of Riders embark on an epic adventure to recruit allies, expose the enemy and prevent the annihilation of their breed. Delivering an intense and unique combat experience, players charge into battle on the backs of ferocious beasts or take their chances with the enemy while on foot. Fighting skill, wits and even magic are all called into action as players immerse themselves in the struggle to defeat an evil intent on enslaving the remains of civilization.” Leaked teaser:

Quotes via Wikipedia & scan via Xboxygen.