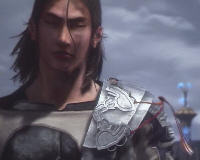 Lost Odyssey is the newest RPG exclusively for Xbox 360 from Myst Walker, a Japanese company headed up by Final Fantasy creator Hironobu Sakaguchi, who is fresh off the release of Blue Dragon. Lost Odyssey is being published by Microsoft, and has a Western release date of February 2008.

Lost Odyssey has an all-star group of designers working on the project. The storyline was penned by award-winning Japanese novelist Kiyoshi Shigematsu, who worked directly with Sakaguchi on the story sequences. Famed Japanese comic artist Takehiko Inoue did the game’s artwork, while beloved Final Fantasy composer Nobou Uematsu is composing the games contemporary soundtrack, and a company called Feel Plus, a subsidiary to Microsoft created specifically to aid Mistwalker, as well as numerous former Square employees at Microsoft, are also contributing.

In Lost Odyssey the player takes control of Kaim, a man who has been sentenced to live for 1,000 years. Gameplay revolves around the many generations of which Kaim is a part of and his personal loves, losses and conflicts, set in a world nearing a “mystical industrial revolution”. The RPG is a stark contrast to Blue Dragon, which had a more kid-friendly, cartoony-style. Lost Odyssey is grittier, edgier and has a futuristic style with realistically proportioned characters. And even though the game looks like it’d be an action game, or at least an action RPG, it is actually a traditional turn-based one, for better or worse.

A few new details for Lost Odyssey have also been revealed. The game is massive, spanning 4 DVD’s and will reportedly be a 40-to-50-hour game filled with CG and real-time cut-scenes. The game will also include both a Japanese and English audio track!

We have covered the game many times already, but four new videos have surfaced via TGS: an all-new Japanese trailer for the game and a video walkthrough by Sakaguchi using the aforementioned English voice overs. View the new trailer and developer walkthrough (in 3 parts) below.