Yoshi’s Story (Nintendo 64, 1 player, rated E for Everyone, 1,000 Wii Points = $10): The evil Baby Bowser has cast a spell turning Yoshi’s Island into a picture book. Worse yet, the Super Happy Tree has been stolen, making the island dark and gloomy. Players must take control of six Yoshis, each a different color, and travel through six pages (worlds) of platforming adventure to recover the tree and return the island to normal. Featuring huge character models and bright, vibrant colors, the game’s various environments (such as woods, caves, mountains and oceans) come alive in a uniquely gorgeous 2½-D look. Eat fruit, avoid enemies and obstacles, and throw eggs from the Yoshis’ never-ending supply in your quest to stop Baby Bowser’s plan from succeeding. If you’re good enough, you can aim for higher scores by being picky about the fruit you eat. And who knows, you might even find the mysterious black and white Yoshis.

(Sega Genesis, 1 player, rated E for Everyone – Mild Violence, 800 Wii Points = $8): In this follow-up to Thunder Blade, you’ll fly a new and improved attack helicopter in a series of attacks against guerilla armies that are bent on taking over the world. Although your aircraft is formidable, your enemies are vast and varied. You’ll have to take on submarines, tanks, fighter planes and more. Your command of this state-of-the-art battle copter must be top notch, as you’ll have to dodge oncoming fire and use your various weapons to eliminate all enemy targets so you can reach the guerilla base and end their nefarious plans once and for all. Put on your flight suit and step into the thrilling action of Super Thunder Blade. 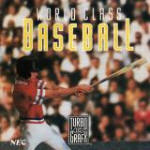 World Class Baseball (TurboGrafx16, 1-2 players, rated E for Everyone, 600 Wii Points = $6): Acclaimed for its steady game play, World Class Baseball is the definitive baseball game on the TurboGrafx16. Battle the computer in OPEN MODE or play a friend in VERSUS MODE. Customize your team in EDIT MODE or even watch a game between two computer opponents in WATCH MODE. World Class Baseball offers the complete baseball gaming experience. Of course there’s also plenty of single-player action. The main feature is PENNANT MODE, where the player chooses a team from one of the world’s leagues and strives to win their team’s league. Beat league rivals and save your progress with passwords on your way to becoming league champions. After winning your league, get ready to the face the other league’s champion in the heated series for the world championship.