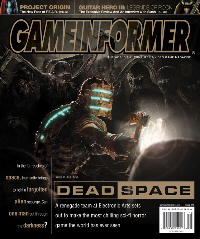 Horror fans, get prepared! Dead Space has been revealed.

The all-new IP from EA is a survival horror title that is part of Electronic Art’s plan to create new IP’s and thus reinvent itself as a solid developer that doesn’t simply rely on sequel after sequel; Which is often the perception of the 3rd-party video game developer and publishing giant (the largest in the world in fact). Especially among so-called “hardcore” gamers who perceive EA as being too derivative for pumping out several new sports games a year.

Dead Space was actually revealed a year ago by P.J. McNealey, a video game analyst who described the game as an Unreal Engine 3-powered first-person shooter.

Game Informer though has now gotten the exclusive reveal of Dead Space, which is featured on the cover of their October issue. Game Informer (GI) excitedly exclaims, “Fans of the cult-classic film Event Horizon and straight-up horror aficionados aren’t going to want to miss this one!“.

However there is no mention of Dead Space being either a FPS or powered by Unreal Engine 3. But they did confirm it to be a “horror” game. Previously the analyst had simply described it as an “action” game. No platforms have been revealed yet, but you can bet it will be coming to PS3 and Xbox 360 (and probably PC as well) given EA’s focus on multiple platforms for virtually all their titles.

GI also gives a few more nuggets of info, from the cover: “In the far reaches of space, humanity brings light to a forgotten alien scourge. Can one man cut through the darkness?” and “A renegade team at Electronic Arts sets out to make the most chilling sci-fi horror game the world has ever seen.”

Definitely has me excited! We’ll keep you updated on this promising new title as more is revealed in the months to come.