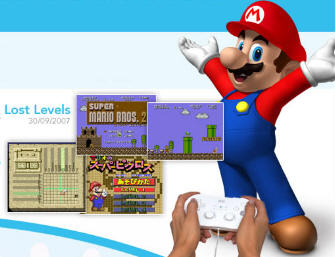 For the first time ever, European and Australian Wii owners through the Wii Shop Channel will be able to broaden their horizons with a selection of great games previously only available in Japan. If you’ve always wanted to discover some of the titles released in Japan or America, now is the perfect time! See this as Nintendo testing the waters for other popular classic games that were never released in Europe, so if you’re in a PAL region you owe it to yourself to buy one or a few of these, that way there’s a chance Europe will finally see games like Super Mario RPG (SNES), Mother (NES), and Earthbound (SNES). But foremost games like Super Mario Bros.: The Lost Levels and Sin & Punishment: Successor of the Earth are amazingly fun to play.

Named after the Japanese holiday season famous for its firework displays, the ‘Hanabi Festival’ (Hanabi literally means Fire Flower) on the Wii’s Virtual Console will see the release of a selection of classic titles split over three themed weeks.

Mario Week (from 14th September): To celebrate the launch of Super Mario Bros. in Japan on 13 September 1985, the first week of the Hanabi Festival on Wii’s Virtual Console will be Mario Week and will feature the classic Super Mario Bros.: The Lost Levels (NES) and puzzler Mario’s Super Picross (SNES).

Ninja Week (from 21st September): Over the following two weeks of the Hanabi Festival, Virtual Console fans will get to experience a host of special classics including the US versions of NES action–platformer Ninja Gaiden and space shoot ‘em up Gradius III (SNES).

Sci-Fi Week (from 28th September): To top it off, the third week allows gamers to discover Japanese-exclusive titles like Ninja JaJaMaru-Kun (NES) and the cult Nintendo 64 blaster Sin and Punishment.

Joining this great game will be 1995 Super Nintendo puzzle title Mario’s Super Picross. This classic picture crossword game, previously available only in Japan, features hundreds of challenging yet relaxing puzzles. Each puzzle features a grid of tiles that reveal a picture when filled correctly. Like Picross DS, Mario’s Super Picross includes a save function allowing players to return to puzzles later and a selection of changeable background melodies. Mario’s Super Picross is available now for 900 Wii Points (that’s €9).

Also, separate to the Hanabi Festival, comes the latest Turbografx release: action-adventure Neutopia II. In the first Neutopia title (also available on Virtual Console) the heroic Jazeta destroyed Dirth the emperor of darkness. Many years later, the shadow of darkness is spreading across the land and Jazeta must once again take up his arms to save his father and defeat Dirth once again. Neutopia II is available now for 600 Wii Points.

With the addition of today’s three new games never seen before in Europe, Virtual Console’s list grows to 138 classic titles. Just a warning to people with old TV’s, your TV needs to support 60Hz to play these games. (50Hz is standard on PAL TV’s, but most TV’s from recent years all support both)