Puzzle League DS for Nintendo DS is a very simple concept for a game, you match three or more similar blocks to clear them from your screen. The blocks resting on top of the matched blocks then fall down to fill the vacant space. If you can make chain reactions of matched blocks, they will score lots of points.

But when a concept is simple, the result like with most Nintendo puzzle games is… a SUPER addictive game. 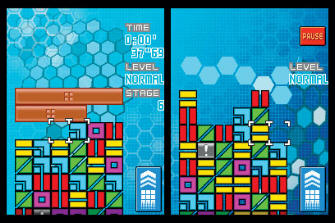 It’s time to put your thinking cap on and get your stylus ready, because in the block-sliding game Puzzle League DS you will have to think on your feet, as you try to ensure that the rising bricks don’t stack up and reach the top of the screen.

With no complicated rules to master, Puzzle League DS can be enjoyed by anyone just wanting to pick up and play. There are dozens of tutorials and demos to teach you the ins-and-outs. But the puzzle game also provides challenges for even the most experienced puzzle players. As multi-colored blocks rise from the bottom of the screen, you have to rearrange individual blocks and attempt to line up three or more of the same color. If you succeed, then the blocks will disappear.

To perfect your puzzling skills, planning and strategic thinking are crucial as the levels become harder and blocks begin to fall faster. To survive you must aim to clear as many blocks as they can in one go to get the highest score possible. There are three difficulty levels: easy for beginners, normal for veterans, brutal for experts! For the more advanced player, blocks can also be moved while other blocks vanish, allowing them to set up a chain reaction and gain more points. However, if you’re not quick enough, the stack will reach the top and it will be game over! “Game Over Man!”

Holding the Nintendo DS vertically like a book, you use the touch screen and stylus to slide and move blocks around to make matches within their puzzles with ease, or alternatively you can hold the DS horizontally and use the button controls. You can even configure for left- or right-handed play.

In the single player mode, you can choose from a choice of the standard Puzzle, Endless, Clear modes, and taxing puzzles including VS. Computer which sees gamers playing against the DS, Garbage Challenge, which involves clearing falling garbage blocks whilst aiming for a high score, Time Attack where you race against the clock to clear the screen and Daily Play, that challenges you to complete tests from three modes every day, this is perfect if you only have about five minutes a day to play these three two-minute games.

There’s multiplayer for players who would rather compete against friends can use the local wireless connection. This allows up to four people to battle with only one copy of the game, meaning multiplayer does not require multiple game cards thanks to single-card download play. For an additional challenge, you can play against players from other all across the globe.

You’ll be matched with opponents according to several different modes:
* Free Play Battle: Players are matched at random; matches in this mode do not influence competitive ranking.
* Novice Battle: Intended for novice players, this mode becomes unavailable after certain skill conditions are satisfied,
* Friend Battle: Players can choose opponents from among connected players whose friend codes have been registered. Up to 60 friend codes can be registered. In-game voice chat is available for players who have mutually selected the “voice chat on” option. Item blocks are only available in Wi-Fi matches in this mode.
* Birthday Battle: Players are matched based on win/loss data recorded for matches played in this mode. Players are ranked against other players with the same birthday according to the number of Birthday Battle matches won during the current ranking cycle. Rankings are reset every week, with a counter indicating the number of days left until the next cycle.

The DS’s Nintendo Wi-Fi Connection allows players with a wireless internet connection to battle against each other online, what’s cool about this is that it improves your ranking. Once two players have exchanged Friend Codes, they can challenge other players in Friend Battle. Puzzle League DS also features voice chat, via the Nintendo DS Headset accessory, for those people who have exchanged Friend Codes.

If you’re keen to become the ultimate player, there are additional items you can use to put your opponent off. Like Reflect, where all garbage is sent to your opponent, and Twitch which makes your opponent’s blocks shuffle for a short time, or Paralyze, where one of your opponent’s rows is made immovable. These items are available in multiplayer modes and when playing against the computer, allowing you to confuse and challenge your opponent.

There’s even a recording feature lets you save puzzles you’ve played and send this example of your puzzling skills to friends by local wireless connection.

In conclusion: If you’re already familiar with the basic gameplay in classics like Tetris Attack, Panel de Pon, Pokemon Puzzle Challenge and Pokemon Puzzle League, then you’ll feel right at home with the puzzle gem. The touch screen gameplay really does give it a fun and easy new way to control Puzzle League DS. Now let’s rate this game on its fun-basis.

FUN FACTOR – 8.5
Forming chains and combos to create waves of waterfalls of panels to rack up high scores is a lot of fun. I wanted a quick-to-play easy-to-put-down puzzler and while it does deliver that, I didn’t think I’d get addicted to another DS puzzle game, but I did thanks to a gameplay goal similar to that of Tetris DS and it’s fun!

Graphics – 8.0
You might get distracted by the bright colors in the backgrounds from time to time. But you can even turn that complaint in to a reason to focus more on the puzzle at hand.

Audio – 8.0
The addition of music styles such as dance, techno and electronic make the game’s audio a welcome experience.

Ingenuity – 8.0
Using the stylus to puzzle on the DS is a second nature already. The developers at Intelligent Systems were smart in adding all sorts of smaller features, like adding a customization element to the franchise, where you can change the game’s backgrounds and block designs. A very well put together package.

Replay Value – 9.0
Six single-player modes, three quick Daily Play modes and tutorials for beginners. You only need one Game Card to start a game with up to three friends in local wireless mode, and four online multiplayer modes. Definitely worth your $29.99 if you enjoy puzzle games.