Madden NFL 07 sold over 7 million copies and was the number one selling game in North America in 2006, Madden NFL 08 is looking to repeat that success with new modes and a big multiplatform release on Xbox 360, PS3, PS2, Wii, PC, GameCube, Xbox, PSP, DS, and Mobiles.

Madden NFL 08 will make you feel what it’s like to be a field general making key personnel decisions on both sides of the ball during the game’s biggest. Quickly identify your strongest players on the field before every snap, then move them into position to make game-changing, momentum-altering plays.

Play to your team’s strengths by immediately reading your opponent’s schemes and reacting to the action as soon as the ball is snapped. Create mismatches and exploit weaknesses as you read and react with the latest and greatest football game currently released. 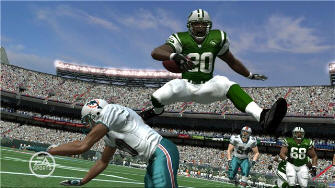 So what are Madden NFL 08’s main features?

One, there’s a new Read and React System. What this does is let new player skill icons identify on-field strengths and weaknesses, providing an immediate read on what your opponent is giving you. Quickly react, create mismatches, and exploit opponent weaknesses before every play.

Two, is the Front Office Mode, where you take full control of every aspect of an NFL franchise. Construct a state-of-the-art stadium, set concession prices, hire your coaching staff, draft players, and manage the entire operation from the top down to build your very own dynasty.

Third is the Ring of a Champion, where you increase your Madden Gamer Level to help create and customize your own in-game championship ring.

Conclusion: This game is perfect for football fans, but also for people new to the game. It’s easy for anyone to just pick up and play once you know the rules, but also keeps the hardcore Madden gamers in mind. Madden NFL 08 brings along with it everything good from past games and adds some fun new modes on top of it. Simply put, it’s the best football game of the year. Its fun to play, great to look at, and it has tons of stuff to last you until next year’s edition. Now let’s rate this game on its fun-basis.

FUN FACTOR – 8.0
Where to begin? You’ve got a Create-a-ring feature, can win awards and points that add up to a ring. There’s even the option to choose from NFL hall of fame players to put on your team and use them in any of the game’s standard modes. Fantasy draft, Mini-games, Create-a-player, Co-op, etc. It all adds up to a very fun game.

Graphics – 9.0
The players all look like their real counterparts, and during gameplay the realism means dirt on their jerseys, scratches on their helmets, and sweat on their necks. If you own multiple next-gen consoles, you should know the Xbox 360 version runs at a smooth sixty frames per second, whereas the PS3 version only runs at a sometimes choppy 30. Otherwise the (high-definition) sharp graphics are looking mighty fine.

Audio – 8.0
John Madden & Al Michaels don’t announce the games; instead the game uses the EA radio announcer, but Mr. Madden does appear when you select ask Madden when picking plays. Otherwise the in-game audio suffices and the wide variety of music has something for everyone. The replay music is the best though, very dramatic.

Replay Value – 9.0
While multiplayer is just one on one matches online, it’s still fun, and the rest of the game offers a very deep game of football. Especially if you’re a fan, you’ll be playing until Madden NFL 09.