NBA 2K8 has a release date of October 7th, 2007 on Xbox 360, PS3 and PS2. As always, it is being developed by Visual Concepts and published by 2K Sports. On the cover this year is Chris Paul of the New Orleans, Louisiana “Hornets”, a Rookie of the Year winner and rising star in the NBA.

With NBA 2K8, the series is receiving a complete AI overhaul, allowing for the most realistic basketball yet in the series. And not only is the AI more realistic, but players like Steve Nash of the Phoenix “Suns” will always hit those open shots if there is no defense around, as it’s not based solely around mathematics. Players will hit shots they are supposed to hit.

The overhaul also applies to players like Kobe Bryant, Kevin Garnett, and Agent Zero, who are great at driving the ball through heavy traffic, and now they have a specific rating that tells you whether they can hit those once impossible (In NBA games) shots, based on their specialties.

Graphics have been given a complete face-lift, including crowds & player models, as well physics, momentum and movement. The new footplanting technology assures that players have to realistically plant their feet before moving.

Offensively you’ll have greater control and flexibility with how plays unfold on the court, and the team at 2K is taking the system to a surprising level of depth. Essentially, the system lets you choose a two-man play to run and gives you the ability to choose which players are involved in that play. Here’s how it works: As you bring your player (say, your point guard) to the offensive end of the floor, you hold down the left bumper (360 version). Immediately, a menu pops up showing four different plays you can call right away with a press of the associated face button: X for get open, A for come off screen, Y for go to post, and B for set screen. Once you’ve called the play, the highlighted player (indicated by a RB button icon above his head) will move accordingly based on the kind of play you called. Once the player is in position (wherever that may be) a button icon will appear. When you press the corresponding button, you’ll pass the ball to him.

While on offense, you’ll see 5 bars beneath the ball handler (resembling a cell phone reception bar), showing that player’s hot zones. Every player has been given zones compiled from their past five years in the NBA, giving you a better idea of where the player is best at making shots on the court.

You can also go on streaks depending on how well you are shooting, whether it’s good or bad, and the aforementioned bars will help in this area too. Blue is for cold streak, yellow is for no streak and red it for hot streak. Getting on a hot streak will boost your overall ratings.

NBA 2K8 also includes many Post Game improvements. You now have a bigger range of Post options, with a great number of moves and shots, and it’s faster and more exhilarating overall.

Like offense, defense has seen many enhancements. Players now have a “Lock-On Defense” option. If your defender is good enough, you can go into this mode against the ball handler. You see a target icon appear, hold L to go into the “Lock-On D” mode. As the offensive player moves, you try to mimic their moves and thus block then from driving by you. If you have some skill you can keep the offensive players from driving the lane and can even ride them out of bounds. 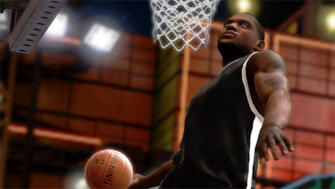 Of course, this can be countered by offensive players, who can turbo past, or pass out of Lock-On D. They can fake one move and go the other, etc. The Lock-On D is only a guide, but is meant to make the game more realistic. But a great defender should be able to beat a mediocre shooter and that’s what these additions try to do.

There have also been a ton of additions to the Post Game show. It starts with the “Jordan Player of the Game”, and you’ll see the player’s stats and their highlight reel. It will even show their hot zones and how well they shot the ball on the court. Then you’ll see the Top 3 Plays of the Game. But you also get highlights for every player who played that game! You can click on Kevin Garnett and see his highlight reel. Then check out all of Nash’s dope dishes. And Barbosa’s sweet jumpers. And if you still want more, there is more! You can actually go through a catalogue of every single play in the entire game and choose any replay you want! Very cool.

One of the biggest new features this year is the Sprite slam-dunk contest. It takes place outdoors on a neon-lit court right smack in the middle of the Vegas strip. DJ Robert “Bobbito” Garcia acts as host and does the commentary for the contest. He roams the court praising the great dunks and chastising the bad ones. The contest starts off with Bobbito introducing the participants, each of whom has his own customized introduction. You might see a player flex and kiss his biceps or just turn to play to the crowd.

Up to four players can take part in the three-round contest. Dunks are scored on a 100-point scale and the lowest score in each round loses. The roster of dunkers includes such high-flyers as Kobe Bryant, Tracy McGrady, Nate Robinson, LeBron James, Vince Carter, Gerald Green, Andre Iguodala and more. You get two tries per round and one replacement dunk if you miss an attempt. But you’ll want to make your first try count because your score takes a hit on replacement dunks.

There are three parts to each dunk: the gather, the in-air style, and the finish. You determine what specific gather and in-air move you’re going to do by moving the right analog stick in specific patterns as you approach the basket. A basic leaning tomahawk dunk is as easy as pushing right on the right analog stick, but more complicated dunks will require more complex motions. A Dominique two-handed windmill jam is down and then a half-counterclockwise circle starting from 12 o’clock; a 360 East Bay Funk Dunk is right and then a full-counterclockwise circle starting from 9 o’clock. Because your gather affects what you can do in the air, there are more than 300 possible dunk combinations. Want to throw down a 180 dunk and then hang off the rim by your elbow? It’s possible. Self-pass behind the back, 180 reverse two-handed jam? Yeah, you can do that too. A sick-looking cartwheel dunk? Yup.

The last part of each dunk is the finish. As you get ready to put the ball through the rim, a meter appears and you must press the right trigger in the highlighted area. This doesn’t sound all that tough, but the meter moves pretty fast. Not only that, but the highlighted area gets smaller for the more difficult dunks.

Adding variety to your dunks is important because the judges will penalize you for repeating the same dunk twice. If you’re looking for a bit of an edge, you can press a button to toss or bounce the ball ahead so that you can catch it and throw it down. You can also use props to spice up your dunks. There are barrels (you can stack up to five), construction horses, speakers, chairs, a sign, and even a car to jump over. Just be sure you can make it over the prop or else you’re in for a painful-looking spill.

Each motion-captured dunk is smoothly animated, and you can admire your handiwork in the game’s slow-motion replays. There are also some great reactions from the crowd and the players. The players will dance and hop around after a big dunk or walk off the court in disgust after being eliminated. You can even knock over and then help up spectators along the baseline.

NBA 2K8 will also include a ton of customization features in the create a player, as well as an experience point system where you can buy items with the points you get. And as should be expected by now, there will be full online support for the game.

View trailers and videos of NBA 2K8 below.