Behind the scenes at Mushroom Men for Wii and DS 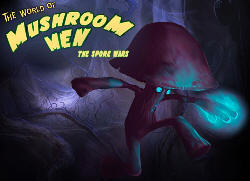 Mushroom Men shows gamers the mundane world from the surreal perspective of a three inch high Mushroom Man. Unnoticed by humans, a war rages between the spore factions. As a brave Bolete Mushroom Man, players are given the opportunity to wreak havoc by transforming common household trinkets and trash into weapons and tools. I thought it was pretty cool that the DS sidescroller version is a prequel to the Wii action game, instead of just a remake.

See the game in action for the first time as developer Red Fly Studios goes behind the scenes at the games’ creation.
The story behind Mushroom Men starts after a comet had passed the earth, all the planet’s researchers concluded its strange green dust had no effect on the world. None noticed that tiny plants and fungi were acting strangely. Mushrooms, cacti, kudzu and other formerly-normal plants had awoken to full consciousness. Tribes quickly formed among the various mushroom species: the primitive Boletes, the aggressive Amanitas, and the inventive Morels. With nations formed, war inevitably followed. Determine the outcome in fall 2008.