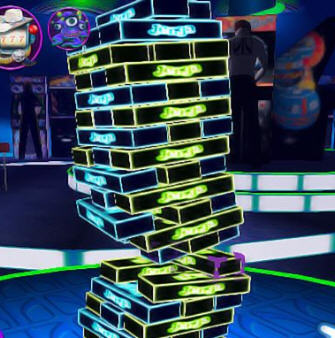 Jenga has a release date on the Wii & DS of November 13th (US). It’s being developed by Atomic Planet and published by Atari, and it’s a virtual video game version of the classic Hasbro block-stacking board game that everyone knows and loves.

In Jenga the board game (and subsequently the video game as well) players take turns taking one block from the lower portion of the tower, which has three rows of alternating blocks, and then stacking that block on top. As you do this the tower gets less and less support and grows higher and higher. Obviously the goal is to get the tower as high as possible without being the player that knocks it over, which becomes more and more likely the higher the tower grows, meaning you have to be more and more careful when pulling out pieces.

The Wii version fully supports the Wii Remote & Nunchuck where you control the camera with the analog stick on the Nunchuck and pull the block out using the Wiimote. While you can play a regular version of the game, what would a virtual Jenga be without additional features that you can’t do in real-life?

Jenga features special blocks, including slippery ice blocks, heavy blocks, “hot” blocks which must be moved quickly, and various environments to play in each with their own quirks. A jungle level features dinosaurs that stomp and shake the tower and pterodactyl’s that swoop in and take blocks away, an alien level has spaceships that shoot blocks out from under you, and you’ll find levels that have wind that makes the tower sway, an underwater level and more that play around with the game’s physics. You can even make a filter that shows where weak-points are in the tower.

Check Jenga the video game out in action below. No info yet on the DS version, but I imagine it’s much the same only with the stylus instead.