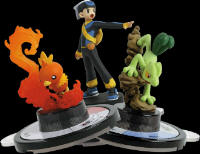 The Pokemon Trading Figure Game is a brand new game from the creators of the Pokemon Trading Card Gamelets you play with amazing new collectible figures of your favorite Pokemon! The release date in North and South America is in September.

It’s no surprise Nintendo would release this new trading game this year. The success of the DS games Pokemon Diamond and Pearl has been overwhelming with the new game selling over 10 million in Japan and America alone, with Europe soon adding millions more to this count.

The successful Pokemon Trading Card Games were first introduced in Japan back in 1996. The new Pokemon Trading Figure Game includes more than 40 figures, a new spinning mechanism that adds movement to your battles, and it’s easy to learn.

You spin to see if you can knock out your opponent’s Pokemon and send them back to the Pokemon Center. Play Trainer cards to give your Pokemon in the field an extra advantage. And reach your opponent’s Goal first to prove… what else… that you’re a true Pokemon Master.

The starter sets will be priced at $14.99 and the boosters at $3.49 for one figure, $6.99 for two figures (including a random mystery figure) and a Trainer card, and $9.99 for three figures, including a random mystery figure and one of three special promo figures (Chimchar, Piplup, or Turtwig) from the Diamond & Pearl release as well as a Trainer card. Future expansions-with additional popular Pokemon to increase the possibilities for battles-are under development.