Home » News » My Sims preview of the Wii and DS game from EA. Release date is September 18th

My Sims preview of the Wii and DS game from EA. Release date is September 18th 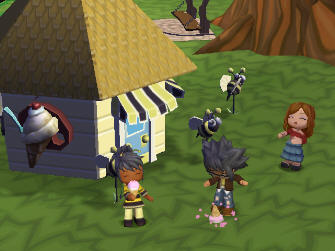 My Sims is an all-new version of The Sims developed exclusively for the Nintendo Wii and DS with a release date of September 18th 2007 in America and September 20th in Europe.

My Sims takes the Sims that you know and love from the best-selling PC franchise and notches up the cute factor by a million. What you get is an extremely unique, kid-friendly yet charming (even to adults) Wii and DS-tailored look, that serves to completely overhaul your perception of what The Sims should be.

Instead of going for realism, it has a chibi, semi-anime style (and indeed, EA is definitely targeting Japan with this game, even modeling their look after popular Japanese Pinky Street dolls) look to it with short, stubby, super-deformed people that exude a tremendous amount of playfulness and look eternally youthful (there will be no aging in My Sims apparently). But the look is so adorable that honestly its appeal is universal (as you can see in the pic above and the video below).

Thankfully, EA didn’t just overhaul the looks, the entire process of the game has been simplified; but in a good way, which is definitely an achievement. As easy to use as the interface in the PC and previous console Sims games have been, it can still seem a bit confusing, particularly to newbies and youngins.

In My Sims, you simply select a category, like say you are making the eye-brows on your Sim, and you keep hitting the button to cycle through the options, it’s literally point & click. Not only can you create your Sims and completely customize their look and appearance, which is easier than ever, but you can even customize their voice! A first for The Sims.

But one of the coolest aspects of My Sims, is not only can you build your house as per usual, but now you can build individual objects! This means you can literally put together chairs, tables, desks, beds, arcade games, whatever you like, piece by piece! And completely customize them. Just like Legos.

My Sims also features a full on adventure mode, where you will find the meat of the game. There’s a central town you can run around in and explore. New Sims that want to move into town will appear at the hotel, and you then may be sent on a task for that Sim, including building the houses other Sims live in. As more Sims move in, more building block-pieces and items will unlock for you to play around with.

Every character that moves into town (and these are all characters made by EA, such as “Goth Boy”) will have different tasks for you to do in their specific locations, but the buildings in town they move into, as well as all the items inside their houses, are objects that the players create. But in order to create the items needed, you will first need to cash in Essences.

As you go through the adventure you will find Essences. These come in various forms for particular items/material (such as video game essences, fruit essences, wood essences, etc.) and you can find and collect these Essences in various ways by exploring. You can get them by shaking or chopping down trees, by collecting fruit, digging, playing or using completed objects and other such things. As you progress you also gain Star Levels, and along with the Star Levels you get tools, which allow you to further explore the town and unlock more locations where you can find and discover new kinds of Essences.

Items you build are built in your workshop, where you are given a blueprint that shows you the layout of where to put pieces to build the particular item for the person in town, but you can work with the blueprint to create stuff in the way you want to, as well as color it your own. While the assortment of ways you can create is not limitless, you are given some leeway as to how you go about building things, My Sims is all about creativity after all.

For much more on the game and an in-depth look at all it’s various features, check the videos below.