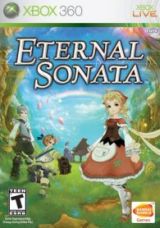 Eternal Sonata (formerly Trusty Bell: Chopin’s Dream) is an RPG for the Xbox 360 with a release date of September 17th later this year in the US. It’s also slated for Sept. release in Europe, but no specific date just yet.

The storyline in Eternal Sonata follows the adventures of a famed composer named Frederic Chopin as he travels through his own dream world filled with colorful characters and stunning locales (and I mean stunning, check out those stylish graphics!). In a land where music influences both combat and exploration, Chopin sets out on a journey not only of self-discovery, but also one of redemption . . .

So where does the redemption play in? Well you see, Chopin died at the age of 39 due to tuberculosis . . . A main concept of the plot says that three hours prior to his death, Chopin dreamed of a fairy-tale land, in which people with incurable diseases have great magical powers . . . He’ll meet several friends along the way who will join him in his adventure, including a young girl named Polka in the Village of Tenuto, who also suffers from an incurable disease . . . Mystery abounds.

The battle system in Eternal Sonata is unique in that musical elements as well as light and darkness effect the type of spells that can be cast and how the battlefield layout appears, including the type and abilities of your enemies. Players are rewarded for careful battle coordination as it allows for deadly combo attacks if done carefully. Depending on whether you are standing in light, or in darkness, your character’s attacks, abilities, even their physical form can change drastically (do I sense . . . werewolf? Vampire? . . .) which adds a whole new twist to combat.Watch this trailer in HD.

Eternal Sonata is an original Xbox 360 RPG developed by tri-Crescendo, the same company that brought us Baten Kaitos: Eternal Wings and the Lost Ocean and Baten Kaitos II: Origins on the Nintendo GameCube. While they were the only ones pretty much making Japanese RPGs for the Cube, here on the Xbox 360 they do have some competition, although once again the Xbox 360 is yet to really be considered an RPGer’s machine, but it’s slowly getting there as Blue Dragon, Lost Odyssey, Elveon and The Last Remnant indicate. And now you can add Eternal Sonata to the growing list.

Although it is considered an exclusive for 360, there is a chance that Namco Bandai will be bringing the game to Playstation 3, although nothing concrete has been announced yet.

Take a dive into this mythical world in the extensive number of trailers and videos below, showing off the absolutely gorgeous, anime-style graphics (it really does look like a living dream!), battle gameplay and the deep storyline.

Update – Check out this interview with the developers for even more info on this great looking Xbox 360 RPG.

GameSpot (GS): Eternal Sonata’s premise is inventive to say the least. How did you come up with the idea of setting a game in Chopin’s subconscious?

Hiroya Hatsushiba (HH): People who play games and people who love classical music are not necessarily sharing [the] same type of interests. Most people in Japan know the name of Chopin; however, most of the people who know of Chopin think he is just some kind of a great music composer without knowing any more about him. Most of them have heard Chopin’s music but not a lot could put his name to it immediately. By creating a colorful fantasy world in Chopin’s dream, I was hoping that people would get into this game easily and also come to know how great Chopin’s music is.

GS: Are any of the game’s locations or characters based on specific chapters of Chopin’s life or perhaps inspired by his music?

HH: The names of locations and characters are all related to music, but this doesn’t mean those are directly linked to Chopin’s real life. We made the setting and characters match the time when Chopin lived, but the world is purely fantasy.

GS: The game’s combat system, particularly the light and dark gameplay mechanic that alters characters’ abilities depending on whether or not they’re in the shade, is something we haven’t seen before. Where did that idea come from?

HH: The most important concept was to be able to learn the battle system quickly. We needed to simplify the controls as well. However, this reduces the potential variety within battles, so we came up with the idea of each special move in light and dark places behaving differently. Also, we created enemies that will change their forms depending on whether they are in light or dark places. I feel that we brought a new type of variety and strategy to the battles with this feature.

GS: Besides the language options, are there any differences between the Japanese version of Eternal Sonata and those being released in the US and Europe?

GS: In Japan, a number of Eternal Sonata Xbox 360 faceplates were released alongside the game. Are any similar promotions planned for the US or Europe?

HH: We actually only made one faceplate in Japan and five faceplates have been made in the US. Currently, there are no plans for this kind of promotion in Europe.

GS: Are you planning to release any additional content for the game on the Xbox Live Marketplace?

HH: Yes. We are planning on releasing the following:
1. Piano Key (Used to unlock all of the musical performances at any time. Without the key, you have to clear that chapter in the game in order to unlock the performance.)
2. Gamer Icon Packs (Customize your 360 profile with official Eternal Sonata character graphics.)

GS: Finally, what advice would you offer to someone about to play Eternal Sonata for the first time?

HH: You will be able to enjoy this game without any prior knowledge of Chopin or his work. People who are not interested in classical music can enjoy this game as well. I am sure you will become accustomed to the control system quickly. I hope players will love the atmosphere of this game enough to play it through.