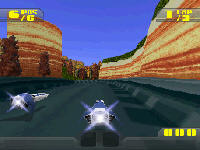 French developer DK Games’ racing game gives you the choice of 3 anti gravity craft which have different skills, speed and handling. There will be the opportunity to unlock 3 more craft if you win each championship attaining first place, as well as being able to unlock 2 extra craft after finishing the normal and hard mode.

While racing the tracks, collectables will randomly appear hovering above the ground to both hinder and aid the player which will include power ups like missiles, mines, speedups, bombs, magnets, etc.

Key game features include:
* 3 modes, easy/normal/hard.
* Cutting edge graphical presentation through creation of an exceptional 3D engine and the best use of the NDS capabilities.
* Wireless local multiplayer mode.
* Simply, effective controls.
* Ingenious AI.
* Each team has a mascot, and one of them will be the Racoon…

The game uses both screens, the upper screen displays the 3D race whilst the bottom screen conveys the opponentâ€™s position and map visualization.