The World of Warcraft: Wrath of the Lich King expansion pack has been officially revealed by Blizzard. As well as mentioning that the MMORPG will get in-game voice chat.

Highlights from BlizzCon 2007 are listed below:
* The dark, necromatic Death Knight will be the first new character (Hero) class added to World of Warcraft since its launch.
* Northrend, the harsh, icy continent where the Lich King holds rule, complete with new zones, quests, items and monsters.
* New level cap of 80 providing access to mighty new powers and talents.
* New battlegrounds featuring siege engine warfare and destructable buildings.
* Engage in epic siege warfare, deploying mighty siege engines to lay waste to destructible buildings in your path.
* Learn the craft of spell augmentation with the new Inscription profession.
* Expanding character customisation options including new hairstyles and dances, the ability to change the hairstyles of existing characters, and new skin color variants.

A trailer gives a first look at the Death Knight & Northrend!Click on the bottom-right corner arrow to view it full-screen.

About the Wrath of the Lich King storyline 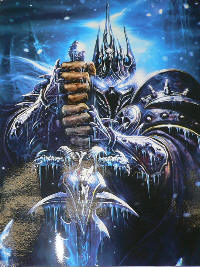 With the opening of the Dark Portal and the renewed war to stop the Burning Crusade’s destruction of worlds, the heroes of Azeroth have given little thought to the frozen wastes of Northend — and the terrible, ancient powers that wait there. Yet the brooding evils of the fallen Nerubian empire and their malevolent sovereign have not forgotten Azeroth.

The former death knight and now Lich King Arthas has set in motion events that could lead to the extinction of all life in Azeroth as his undead armies and the necromantic power of the plague threaten to sweep across the land. Only the mightiest heroes can survive the frozen northlands with any hope of disrupting the plans of Arthas — and perhaps even challenge the Lich King himself and end his reign of terror for all time.

Blizzard Entertainment’s latest expansion to World of Warcraft — Wrath of the Lich King — opens up the harsh, icy continent of Northend for adventuring and exploration. New levels of power will be achieved, as players quest their way to the extended level cap of 80 — and then use all of their newly won might to battle the undead armies of the fallen Nerubian empire. Ultimately, players must face the dread Lich King Arthas himself.

World of WarCraft’s first Hero Class is a plate-wearing tank/DPS hybrid that works a little something like this: When players hit level 80, they’ll be able to embark on a quest (similar in difficulty to the Warlock’s epic mount quest, back before the level cap was raised to 70) that unlocks the ability to create a Death Knight character. The Death Knight starts at a high level (somewhere around 60 or 70, though Blizzard isn’t certain yet), so you won’t have to grind your way back up all over again. It’s intended as an alternative, advanced class for end-game use only.

Rather than using rage, energy, or mana, Death Knights have a special “rune sword” displayed beneath their health bar, onto which the player can etch six different runes (choose between Frost, Blood, and Unholy). Different abilities require different mixes of runes, and using abilities consumes the requisite runes until a cooldown timer causes them to be available again. Stuff like talents, spells, and other specifics are still being finalized. So are key questions like what races can be a Death Knight (start a Gnome petition now) and whether unlocking the Hero Class on one server means you can create a Death Knight on any server.

BlizzCon 2007 will be open today and tomorrow, you can get a free live feed into the show at Giga.