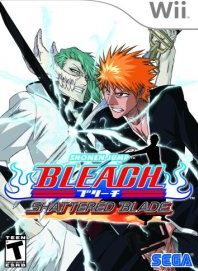 Bleach: Shattered Blade, like it’s DS counterpart Bleach: The Blade of Fate, is a fighting game based on the insanely popular anime and manga series. It is being developed by Polygon Magic and published by Sega and has a release date of October 9th 2007 in the U.S.

The Wii version, naturally, has full support for the Wiimote and Nunchuck so you will literally be swinging the remote to control the character’s sword slashes, whether or not the character uses a sword. The game is viewed from a side-perspective, so this can make it a bit confusing when swinging the remote. Special and unlockable attacks are performed in conjunction with the A & B buttons and swings. As is typical for fighters, there is both a story and arcade mode, with full voice overs, and a training and gallery mode.

The game stars a large cast of over 14 playable characters, including an all new character created in conjunction with Bleach creator Tite Kubo, named Arturo Plateado. The character list includes: