In a Microsoft interview two weeks ago the corporate VP at Microsoft Game Studios, Shane Kim, said “July is a very odd time to announce a price reduction,” while referring to Sony’s $100 PS3 price cut of the 60GB version. Then earlier this week Hollywood reporter sources said that the price of the Xbox 360 will be cut by $50 on August 8th, just in time for big titles like Madden NFL 08, BioShock, and John Woo Presents Stranglehold in August.

All these rumors aren’t without merit as Michael Goodman, director of digital entertainment at Yankee Group, suggested that a $50 drop would boost Xbox 360 sales but not dent the market leader. He said “I think the price points are still high enough that they won’t stop Nintendo from maintaining their momentum.”

But they do need to increase their own sales before their big titles like Halo 3 hit end September and beyond. According to the NPD Group, the Xbox 360 and PS3 continue to trail Nintendo’s Wii in terms of U.S. sales. In June, Wii outsold the Xbox 360 by nearly 2-to-1, 381,800 units to 198,400 units. But with the PS3 selling only 98,500 units in June, the good news for Microsoft is that it seems to be winning the battle for the hard-core gamer. 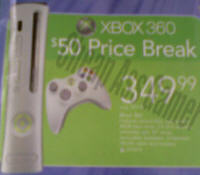 Toys R Us and Walmart’s August 12 Sunday Ads this weekend confirmed a $50 price cut on the Xbox 360. At least in their respective stores. These ads confirm the Hollywood Reporter’s scoop that a $50 price cut would begin in early August. Currently, it is uncertain if the $50 price cut is only valid for the $400 Premium system. At the very least you’ll know where in the U.S. to get a $50 discount in two weeks time from now. — Via Cheapassgamer