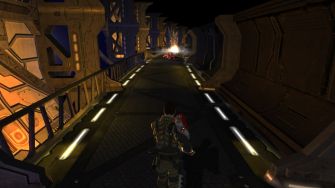 Chris Taylor of Gas Powered Games, the creator of the upcoming Space Siege title (published by Sega with a Q3 2008 release date for PC) is a follow-up to his classic Dungeon Siege game.

He discusses why he thinks the space setting is a refreshing change of pace for RPGs, the lessons he’s learned from games past, the game’s main character, storyline and premise, how this game is more focused than anything he’s done before and his thoughts on telling a good story. He also talks a bit about the multiplayer in Space Siege.

And if you don’t know much about this title, take a look at our previous coverage.

GameSpot (GS): After creating the successful and well-received real-time strategy game Supreme Commander, why did you decide to go in the direction of a new action role-playing game?

Chris Taylor (CT): We have a lot of experience in this genre, and wanted to do something that utilized that experience but went in a fresh new direction. There were so many fantasy RPG games made, we felt that space was not only the final frontier, but a refreshingly different one.

GS: Why the decision to go with a sci-fi setting, rather than the fantasy setting of the Dungeon Siege series?

CT: We’ll likely come back to the more traditional fantasy setting at some point in the future, but for now, we thought it would be good to take a break and change up the theme, give players a taste of something new.

GS: What specific lessons have you taken from the development of the Dungeon Siege games and applied to Space Siege?

CT: We learned that longer games aren’t as good as games that have a strong focus on character and story, and that are really well crafted and polished. We have really learned to focus ourselves much more than in the past, and really pay attention to the little details. And we’ve quadrupled our effort to bring the characters in this world alive, and have focused on world-class dialogue and voice acting. These things were luxuries before. Now they are a necessity. 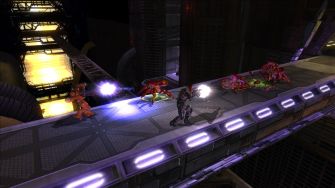 GS: Tell us about the game’s story and main character, Seth. How did you come upon the idea of a character that pretty much trades his humanity directly for power by replacing his body parts with implants? What does that add to the game?

CT: The story is a collaborative effort with everyone on the team and has produced a result we are all very proud of. We have created a character that hopefully everyone who plays the game can identify with, and really become attached to. It was a big deal to move away from the standard, make-your-own character system and create a character to tell a story about, but we have confidence that this is more interesting than a generic character that doesn’t speak. Seth has spirit, he has a history, he’s a real guy, and he’s the only guy who can really save humanity from extinction. And whether or not he gives up his humanity to save everyone is an open question…a question only the player can answer.

GS: The Dungeon Siege games seemed like they were mostly about hacking and slashing and less about telling a story. Will this new game emphasize story more strongly? If so, how will it keep players’ attention even while they’re busy blasting at aliens and picking up loot?

CT: Absolutely, this is our biggest game ever to focus on story. And we are doing it in a very different way than standard RPGs, where the story is told “in town,” inserted into bits of dialogue from the shopkeeper. This game has the story evolving at every turn, behind every door, and it’s carefully integrated into the gameplay. It’s going to feel very different, from a story perspective, than previous games we have developed.

GS: What can you tell us about the loot and items in the game and what role they’ll play? We understand that Seth can upgrade his own body with mechanical parts. What other kinds of loot will he acquire? Will there be some kind of crafting or item-set system that lets players construct better, more-powerful items? 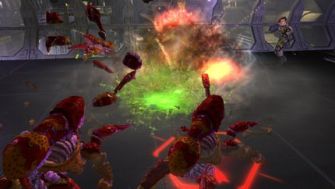 CT: Since it’s a sci-fi game and Seth is an engineer, it’s going to have a very different loot system than Dungeon Siege. It’s not about finding stuff by the truckload and picking through it, it’s much more selective and thoughtful. Seth will find bits and pieces of things and use them to upgrade himself and his robot companion, HR-V. I think we went a little too far with the crazy amounts of loot in Dungeon Siege, and we’ll be dialing that back to be a lot less insane in Space Siege.

GS: What can you tell us about Space Siege’s multiplayer at this point? Could you give us some more details as to how it will offer original adventures (not just the single-player game all over again), like the original Dungeon Siege did? How many players will it support?

CT: It will support up to four players, and again, this number comes from our experience on Dungeon Siege. We allowed a lot more players but found that four was the sweet spot, so we are focusing ourselves on that goal. Like you suggest, multiplayer isn’t simply single-player with a group, it is a carefully crafted series of regions that are designed to support a multiplayer experience and allows players to jump in and out a lot more fluidly, and for a select amount of time. We are very sensitive to the fact that players don’t always have hours to play multiplayer, and that, say, 20 minutes is all they might have. We are responding to this request, and like all our games, listen to what our customers want… It’s not always apparent, but we are listening.

GS: Finally, is there anything that you’d like to add about Space Siege?

CT: Space Siege poses an interesting question… Is losing one’s own humanity a fair price to pay for saving the human race? I think so, but the question is, can you have your humanity and save it, too? I hope everyone tries! –via GameSpot