MYST DS for the Nintendo DS will be available in November 2007. Visualante got a chance to sit down with Manny, the remake’s executive producer, for an interview. When MYST DS was first announced for Europe it promised “newly remastered video and audio,” utilizing source code specifically re-written for the Nintendo DS. The remake will feature Rime as a playable Age, with an all new graphic set. But what else is new? Ignoring the PR speak, there’s a lot of new info revealed. And don’t forget, like the PSP version, the DS version is also region-free, so even if it only comes out in Europe, it’ll be playable worldwide. Here’s the interview.

Question: Adventure game fans spanning the internet over have been crying out for some adventure games for the DS. Besides offerings from Cing these cries have been mostly ignored. What makes you bring Myst to the Nintendo DS now?
Answer: The DS is a fundamentally engrossing platform that once again allows the user to become part of a digital world. Offering such a versatile platform, Nintendo offers a canvas with limitless potential. MYST is the quintiessential story of despair, freedom, and drama. We all felt that the DS, more than any other platform with its touch screen and portability, would find MYST the essential adventure companion. Once again the worlds of MYST and beyond are opened for a whole new audience and those loyal fans once again finding the need to adventure.

Question: Part of the experience of Myst is the isolation, from being alone and using your initiative to unravel the world? Do you think that migrating the game to a portable would lose some of the charm and atmosphere. If not then what have you done to try and maintain the Myst experience on a portable?
Answer: As mentioned above, the DS’ natural relationship with its user made it the ideal platform to really make MYST shine. 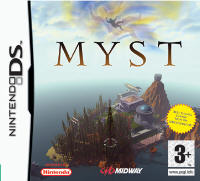 Question: Do you plan to implement any touch screen controls such as note taking or
maps?
Answer: We are adding several elements that will support the player as they journey through MYST. Features such as Map generation and Notepad are but a couple of the unique tools available to the MYST adventurer on the DS.

Question: It is famously claimed that many bought the game but few finished it. What do you intend to do to make the game more flexible if players get stuck, for instance the spaceship’s organ puzzle? Not that I got stuck there, of course.
Answer: Along with a touch interface, we have given a set of tools to support the player in their adventure. MYST is a vast and magical world that the greatest tool is the players inquisitive mind. We are also allowing players to take Snapshots so that they can remember clues easier.

Question: In the island’s library there are books full of architecture and writings. Do you think supporting these in the DS’ vertical orientation would encourage people to read and appreciate the contents of the books?
Answer: Yes, by allowing the players to explore all the elements of MYST as well as the depth of feel, the player will become part of the adventure itself and truly learn the lore of the land.

Question: If the game is well received would that be enough to warrant Riven coming to the DS? Is that something you’d be interested in?
Answer: We’ll have to see, but no commitment to it yet.