Doraemon Wii is a boardgame minigames collection on Wii 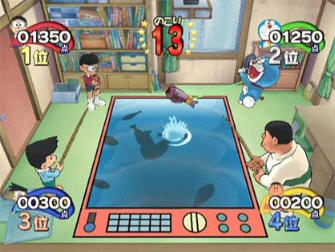 Japanâ€™s arguably most popular anime character, Doraemon, will be getting his own boardgame-styled videogame. Being developed by Sega, the game is expected to be released for the Nintendo Wii in winter 2007 in Japan, Famitsu reported.

â€œDoraemon Wii: Himitsu Doguo Kettei Senâ€ as it’s full title reads, will include several fun-packed competitive minigames like the Fishing game shown above and it’s played via a big boardgame map like Mario Party. The game of course make full use of the Wii motion sensor controls in the Wiiâ€™s remote controller, translates Japannewsreview.