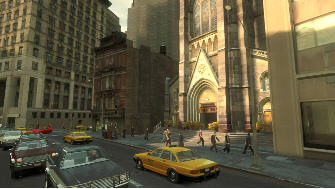 The past few weeks a lot of big Grand Theft Auto 4 previews have appeared in magazines and websites that got exclusive interviews with the game’s developers at Rockstar.

One of the more surprising comments was when Rockstar’s Hosi Simon in an interview with Gamesradar says when people are met with the choice between the Xbox 360 and PS3 version of the game, they should choose the Xbox 360 version because of the extra episodic content that will be downloadable after release: “They’re identical games. We’re not hardware makers, and we’re not like a pawn between these companies, we try not to be as much as we can. We make great games for people to enjoy on whichever system they want. But I guess if you want the complete experience with the episodes, then yeah, you should buy [the version on Xbox] 360, I suppose.”

Here’s a summary of what the new GTA 4 previews tell us:

* The GTA 4 demo which was shown is from the Xbox 360 version of the game. The PlayStation 3 version is still “a week or two behind,” according to Rockstar. The build shown is 5 weeks old, and the framerate has improved considerably since the last demo.
* At Star Junction (the GTA IV equivalent of Times Square) there is a theatre show on called T.S Pirate at the Thespian Theatre, and a camera store called Liberty Cameras. On the way to Rotterdam (where Little Jacob is situated) they passed a cocktail bar called “Bahama Mamas.”
* Little Jacob is a Jamaican gun dealer from Dukes (the GTA IV equivalent of Queens.) The weapons on offer were $100 a piece.
* The name of each street is displayed at the bottom right of the screen as you enter it. During the demo, Niko passed through the following areas: Presidents City, Chinatown, Lancet, Hatton Gardens, Middle Park East, Lancaster, Ruby Street, Cod Row, Denver Avenue, Exeter Avenue, Northwood, East Holland, Silicon Street, Quartz Street, The Triangle, Easton, Diamond Street and Calcium Street.
* After hailing a taxi, you need to press Y to get in one, although the controls haven’t been finalized. You have the option of sitting back and enjoying the ride, using the “trip-skip” option, or paying double the fare to make the driver go twice as fast. Inside the taxi, you can see and talk through to the driver in the front. The camera view changes every 5 seconds. 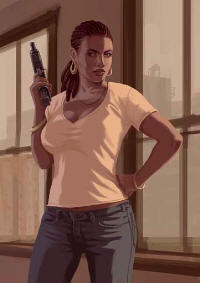 * There is a yellow light cone representing an objective, which triggers a cutscene when you walk into it.
* Francis McReary wears a black suit and tie, has a mustache and slicked blonde hair with a strong side parting. The person who blackmails McReary is at Union Drive East. McReary texts Niko the phone number of the blackmailer, so that he can phone it and identify who is the target. The name of the cell network is “Whiz.” A black comet is used for this mission.
* The default camera angle is slightly over to the drivers’ side. Different angles are available however. You can move the camera aswell, but if you’re not touching it, it will remain at the more central position leaning towards the drivers’ side.
* Currently, the total number of wanted stars is 6 – the same as it was in previous Grand Theft Auto games.
* There is a GPS system in the car, and the recommended route shows up in yellow on the radar at the bottom left of the screen.
* You can auto-target as well as manual aim. Niko can take cover behind just about anything, and so can the cops.
* It also revealed that Goldberg’s (the shady lawyer) first name is Tom.

Screenshot and info compilation by GTA4.net.