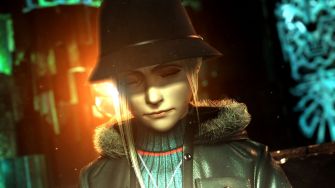 Folklore is an upcoming exclusive PS3 action adventure game that melds various genres into a very unique fantasy adventure. It includes a deep and involving mystery storyline, RPG elements, puzzle solving, exploration and monster-catching and wraps it around a fast-paced action title with absolutely gorgeous graphics, effects and cut-scenes.

The game allows you to select from two main characters each with a different storyline. Ellen, a shy college student who’s studying comparative civilizations, receives a letter from her mom, who died when she was a child. The letter says “I want to meet you,” and suggests that Ellen go to the town of Lemrick. There, she meets Keats, a journalist who handles the occult corner of a magazine. He receives a phone call from an unknown girl asking for help. When he gets to Remrick, he finds that the girl has already been killed, and decides to start up an investigation.

Folklore not only looks amazing, it has the gameplay to match. You basically capture the souls of various creatures using the PS3’s motion-sensing Sixaxis controller to literally “yank” their souls right out of their bodies! Once captured, a monster can be powered up with additional souls, and equipped via the face buttons. Each character also plays differently since Ellen literally summons the monsters to attack, while Keats uses the monsters attacks directly without summoning, giving them both a different feel.

Folklore is being headed up by Kouji Okada (the father of the Shin Megami Tensei series), thus Folklore has a very dark, mature, but fairly realistic fantasy look to it. It’s really unique, and the outstanding graphics make some of the environments look like you’re walking through a dream. Folklore is scheduled for release this October 2nd, 2007.

View the game yourself and find out more info on the title in this Folklore Video Preview.Watch this video preview in HD.

Folklore E3 2007 InterviewClick on the bottom-right corner arrow to view it full-screen.

Folklore E3 2007 Gameplay Montage.Click on the bottom-right corner arrow to view it full-screen.

Folklore Developer Walkthrough.Watch this in HD.