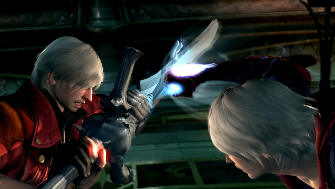 The official Devil May Cry 4 website has revealed new characters Credo, Agnus, and Gloria from the PS3 and Xbox 360 game, aside from the new female lead Kyrie. Above you can see a screenshot from the Dante Versus Nero fight. Lots of detail in the PlayStation 3 graphics shown so far.

Capcom recently announced the game’s delayed from this holiday season to a release date in March 2008.
Update: Just found a Dante VS Nero trailer.