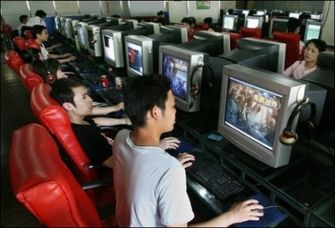 Looks like trouble may be in store for teen gamers in Communist China, where video games and online gaming (in particular) are very popular and growing industries. Internet cafes are often full of players adventuring in their MMO of choice for hours on end, and there’s even been reports of gaming deaths related to MMO-obssessed players (in China as well as other Asian countries).

And now the Chinese government has announced that they are getting involved, by literaly setting limits on the amount of hours teenage players can spend gaming.

Under new rules that took effect Monday, Chinese Internet gaming companies must install a program that requires users to enter their ID card numbers. After three hours, players under 18 are prompted to stop and “do suitable physical exercise.” (Do they instal a camera to make sure the players actually do said exercise? :P)

If they continue, the software slashes by half any Experience points earned in the game and if the teens try to break the rules and stay on for over five hours, then the game will literally wipe out all the player’s experience points! (Talk about harsh!)

The program is part of a government campaign to combat Internet gaming addiction, “clean up the Internet environment” and “promote civilized Internet use,” according to guidelines issued by China’s General Administration of Press and Publication.

About 10 percent of China’s more than 30 million Internet gamers were underage as of the end of 2006, according to the Chinese newspaper National Business Daily.

The government guidelines don’t flat-out denounce the popular pastime, saying “measured gaming is good for the brain, but gaming addiction hurts the body.”

The explanation says the three-hour cutoff is based on the time it takes to play the strategy chess game Go.

Gaming companies Shanghai-based The9 â€” which runs the popular “World of Warcraft” online game in China â€” and Shenzhen-based Tencent both said Tuesday they have started using the screening software.

The9 spokesman James Zhao said he doesn’t expect the new restrictions to affect business because most of The9’s users are adults. “World of Warcraft,” from Vivendi SA’s Blizzard Entertainment Inc., is the world’s most popular online game and has more than 3.5 million subscribers in China.

Tencent said in a statement it’s too early to tell if the screening will hurt its sales. The South China Morning Post quoted a spokesman as saying youngsters can beat the new screening program by using false identities.

“It’s hard to tell online if the player is a teenager or an adult. Many of them can register for the game using someone else’s ID or even a fake ID,” Song Yang told the newspaper.

Both companies voiced support for the new government measures.

The online gaming industry “will develop in a healthy, harmonious direction” because of the monitoring system, Zhao said.

President Hu Jintao ordered regulators in January to promote a “healthy online culture” to protect the government’s stability, according to state media.

Though China’s communist government promotes Internet use, it has also set up an extensive surveillance and filtering system to prevent Chinese from accessing material considered obscene or politically subversive. —-Via Yahoo.com