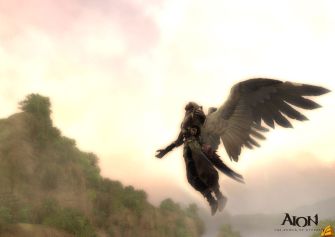 Aion: Tower of Eternity is an upcoming PC fantasy MMORPG developed by South Korean NCsoft (Lineage, Guild Wars, City of Heroes/Villains), who was just recently purchased by Sony (which means a PS3 version of Aion is all but inevitable). And while MMORPGs are a dime a dozen nowadays, Aion has a few unique features that set it apart.

The game mixes both Player VS Player (PvP)and Player VS Environment (PvE) into one seamless experience. In the game’s world, two playable factions exist, the Elyos and the Asmodians. A third faction, the Balaur, is server-controlled.

The Elyos are Angel-like characters who live in the upper half of Aion, a light and vibrant half of the Aion world, while the Asmodians are slightly more Demon-like and live in the lower half, the darker side of Aion.

The Balaur are unpredictable NPCs that have free will and cannot be played as.

While that may not sound all too special, there is one very distinct feature of Aion that sets it apart, and that’s flying. Not only will players be able to apparently sprout wings and fly across the continent (without having to ride a beast), but also attack from the air!

To find out more of the game, watch these new Aion videos that showcase the game’s combat, clothing (complete with dancing!), environments and two older trailers.Watch this video in HD.

Aion clothing (and dance!) trailer. Looks great!Watch this in HD.

And finally, watch this early Aion trailer from E3 2006.