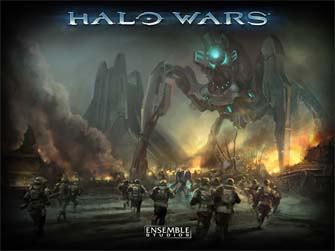 According to Halo Wars producer Chris Rippy, the Xbox 360/PC RTS game demo will arrive on Xbox Live/online “for sure before the game comes out.” A fun bit of trivia is that in early development the FPS Halo series was being developed by Bungie as a Myth-like RTS! The same interview with the game’s developers at Ensemble Studios reveals these ten nifty facts.

10. The game takes place before the events of Halo 1.
9. Resource Gathering is minimal. Focus is on combat.
8. All cut scenes are done in engine.
7. The engine is written from the ground up by Ensemble and looks absolutely gorgeous.
6. The needler is the Halo 3 needler, not the Halo 2 one.
5. The control scheme was literally written from the ground up for an Xbox 360 controller.
4. The music isn’t going to be composed by Marty O’Donnell.
3. There are a ton of a little touches that help build out the world. The world is full of life and random activities.
2. The game will have Spartans.
1. The game will feature online Co-Op!

You can listen to the full interview at Evilavatar.