Paper Mario (Nintendo 64, 1 player, Rated E for Everyoneâ€”Comic Mischief, 1,000 Wii Points = $10): Paper Mario is a graphically innovative game that breaks from the confines of the RPG genre. Now slimmed down, everyone’s favorite plumber flips, spins, jumps and hammers his way through scads of exotic worlds that teem with a huge and hugely entertaining supporting cast. Players control numerous old and new characters in a complex, nonlinear story that follows different scenarios depending on player choices. A dizzying collection of spells, attacks, skills and special items can be collected by players willing to thoroughly explore the lush 3-D environments.

(NES, 1-2 players, Rated E for Everyone, 500 Wii Points = $5): Control a character to pop your opponents’ balloons before they pop yours. Sounds easy, doesn’t it? Don’t be fooled by this game’s simple premise or cute exterior. Underneath you’ll find a surprisingly addictive game with strategy to spare. After mastering the easy-to-learn controls, you still have to get a grip on the game’s impressively realistic physics. And if that’s not enough, there are the ever-increasing enemies and environmental hazards like lightning and water. Try the game’s second mode, Balloon Trip, if you feel like taking a break from the action and just want to see how long you can stay aloft. And hey, who doesn’t like popping balloons sometimes? 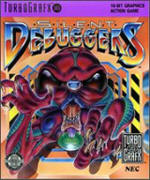 Silent Debuggers (TurboGrafx16, 1 player, Rated E for Everyoneâ€”Fantasy Violence, 600 Wii Points = $6): Make your way through a dungeon-like space station and defeat the prowling monsters in this real-time first-person shooter. You’re a member of the elite Debuggers, a group of warriors who are jacks-of-all-trades. Assigned to inspect an unmanned space station, you have exactly 100 minutes to get in, destroy the monsters lurking in each block, make your way to the lowest level and deactivate the automatic detonator placed there. With each monster that slips by you, the core block becomes harder to survive in, so speed is key in preserving the facility and each separate block. Experience the thrill of survival as the timer ticks away and you uncover the truth of the events that occurred.