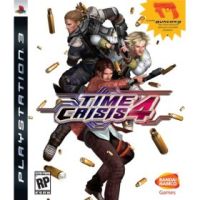 Time Crisis is a classic arcade light-gun shooting game from Namco. It was a big hit in the arcades, and so naturally Namco started to bring the games into people’s homes by releasing them on consoles, back then on the PS1 (Time Crisis 1 and 2). Included in the box was also the best home lightgun ever made, the orange colored “Guncon”. The third installment, Time Crisis 3, was released on the Playstation 2 and shipped with the Guncon 2.

Now the newest installment, Time Crisis 4, is coming home to the Playstation 3 on September 13th this year for $89.99 and included in the package will, of course, be the newest Guncon 3 lightgun peripheral.